Let’s talk about homemade vanilla extract, and why it’s a great idea to make it! 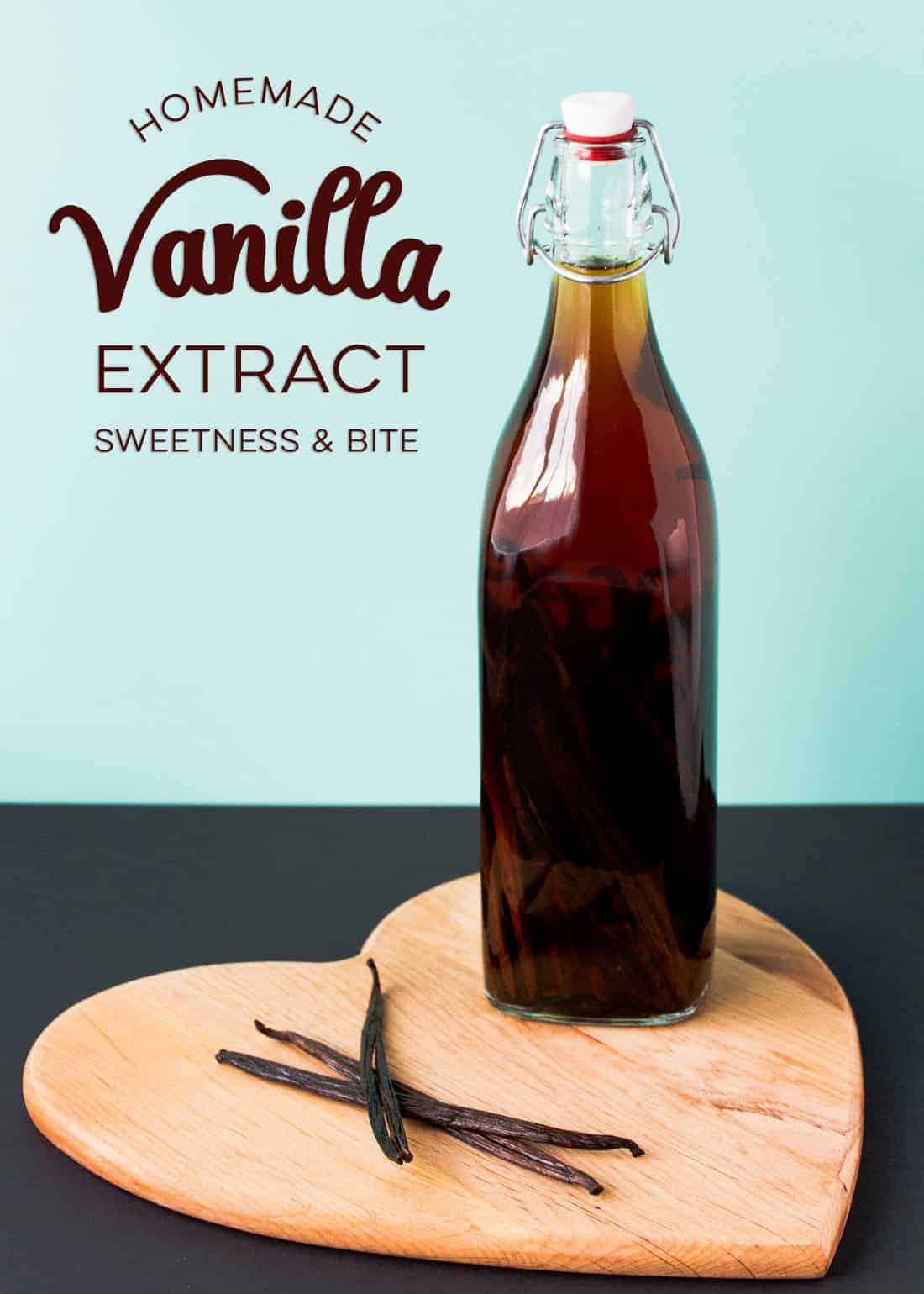 There is something about the taste of vanilla that brings together all kinds of other flavours. Like a super smooth blank canvas, it provides the perfect backdrop to any flavour masterpiece you choose to create on top.

Good quality vanilla extract can be pretty pricey, but if you can get a good price on alcohol and have access to vanilla beans, it can be considerably cheaper to make your own extract.

Making homemade vanilla extract is also one of the best ways to know that you’re getting a high-quality product that will make your baking sing like Beyoncé in the shower.

(I had to specify a good singer, coz my singing in the shower is more “imitation vanilla essence” than “vanilla beans hand-picked-by-virgins under a rainbow and delivered by unicorns to a factory where leprechauns and fairies make them into extract”.)

The basic premise is pretty simple – shove some vanilla beans into a bottle of vodka, shake it regularly and wait a few months for that clear vodka to get all deliciously dark and fragrant.

Have I talked you into wanting to try it yet? Yes? Ok then, let’s talk details!

What Kind of Vanilla Beans Should I Use?

While I recommend using good quality vanilla beans, keep in mind that you don’t need to use super-plump, Instagram-worthy beans to make vanilla extract. In fact, it doesn’t matter too much if your beans are pretty dry. This is why some vanilla suppliers sell what’s known as “Grade B” or “Extract Quality” vanilla beans. These are beans that are a little drier, sometimes smaller, and not as easy to split in half and scrape the seeds out, as you might for many pastry or baking purposes. They also don’t look as pretty.

But, these somewhat shrivelled little babies still pack the same flavour punch, and once they’ve soaked in alcohol for a while they plump right back up and start infusing their flavour into the alcohol.

I have started buying Grade B Madagascar vanilla beans from Beanilla in the USA. Even with the shipping cost to New Zealand, these were cheaper than buying beans here. It’s worth having a look around to see what’s available.

Some of the ones I used in this bottle below were recycled beans – I had used them for a previous bottle of extract. I sometimes throw a few ‘used’ beans into a fresh bottle of extract as they still tend to have some flavour left in them.

Don’t forget that once your beans have done their dash as extract beans, you can dry them out and pop them in some sugar to make vanilla sugar.

What Kind Of Alcohol Should I Use to make vanilla extract?

For basic homemade vanilla extract, you can simply buy a bottle of vodka, pour a little out, shove in your beans, top it back up, and be done with it. This will give you a very “pure” vanilla flavour, and that’s why many recipes only call for vodka.

But let’s be honest, I like to be a bit extra sometimes, and my extract is no exception. So I add a not-at-all-secret-anymore ingredient – Rum.

Dark rum has a smooth, sweet scent, owing to the fact that it is made with byproducts of the sugar making industry, such as molasses, which are fermented and distilled. The sweet and almost caramel-like flavours are what give rum its distinctive taste.

Adding some rum to the extract to it takes it to a whole other level, with the sweet notes of the rum rounding out the vanilla.

You can pretty much experiment with any liquors you like though. I know a lot of people also add bourbon to their extract, and I’ve just made up a bottle to test it out, I shall report back when it’s ready. I’ve also been known to pop some beans into a bottle of Kahlua to make vanilla bean Kahlua.

Wondering what brand of alcohol you should buy to make your extract? To be honest – any good-quality brand should do the trick. I tend to use Smirnoff or Absolut vodka, and Coruba rum. Just check the alcohol content on your vodka, around 37% – 40% is ideal.

To make my homemade vanilla extract more cost-effective, I buy the alcohol when it’s on special or from duty-free shops if we’re travelling. This can considerably lower the price.

For a continuous supply of homemade vanilla extract, I like to make a new bottle every six months or so, so that by the time I have finished one bottle, I have another that is dark, delicious and ready to use.

And considering how easy it is to make, making it regularly isn’t too much of a hardship.

How to make Vanilla extract:

All you need is: 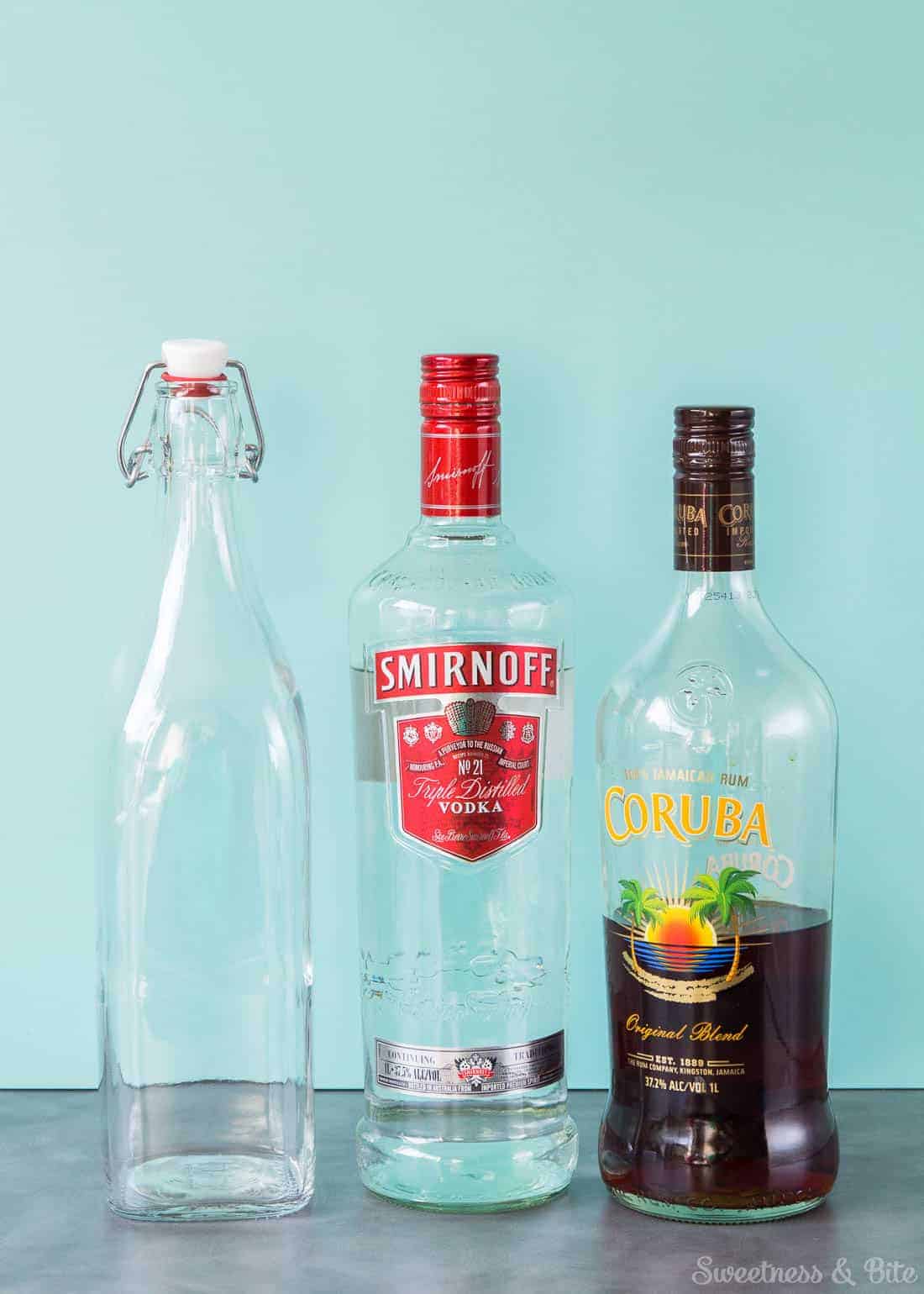 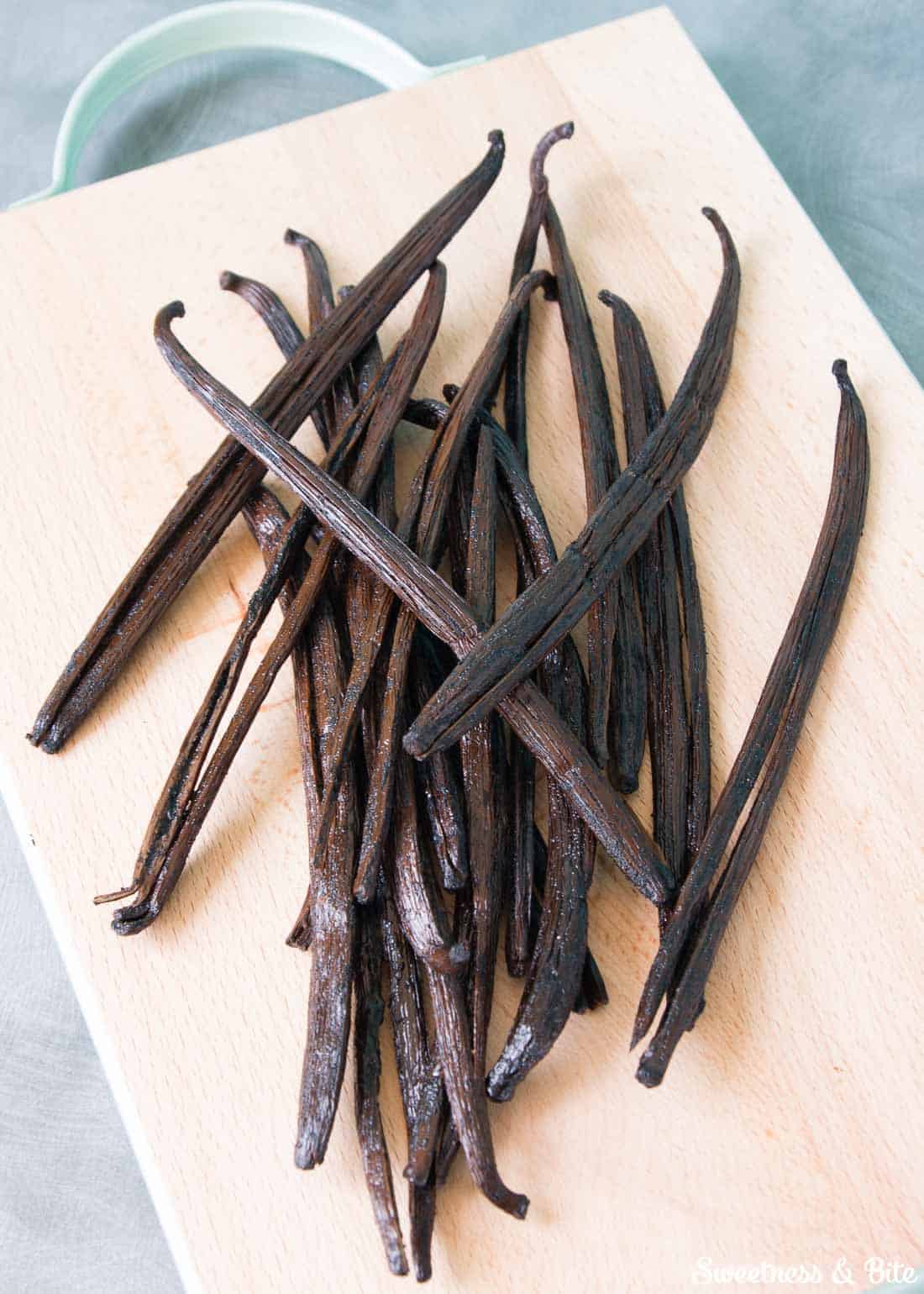 Split the beans down the middle, leaving one end attached. Now’s the time when you have a big decision to make. How seedy do you want your extract? If you love to have vanilla seed flecks in your baking, then scrape the seeds from the bean with the back of a knife and pop the seeds into the bottle. If, like me, you prefer to choose when you want seeds (and achieve that by adding prepared vanilla paste) then don’t worry about scraping the beans, just split them.

Some seeds will, of course, escape their pods, but this is a good thing. Seeds = flavour. But they will settle to the bottom of the bottle and you can decant your extract into smaller bottles, leaving most of the seeds behind, or strain out the seeds using a fine sieve once your extract is ready.

You could make extract without splitting the beans and therefore not have seeds, but it will take much longer for the flavours to develop. If you really, really don’t want any seeds, you’re much better off having the seeds in it, and then straining the extract to remove the seeds. 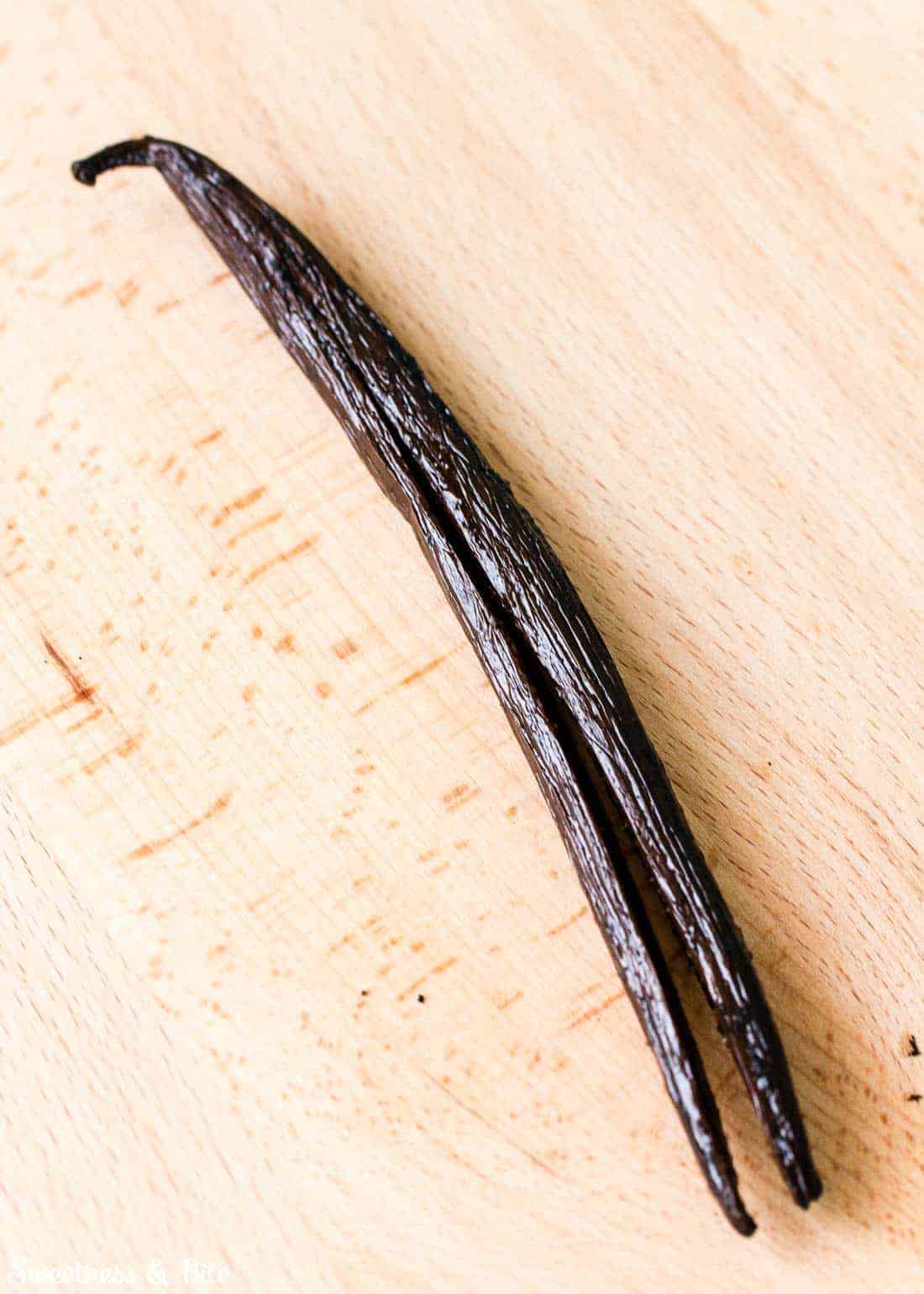 Fill your bottle up about 1/4 of the way with rum. Rough measurement is fine, you don’t really need to fuss about with cups and whatnot. 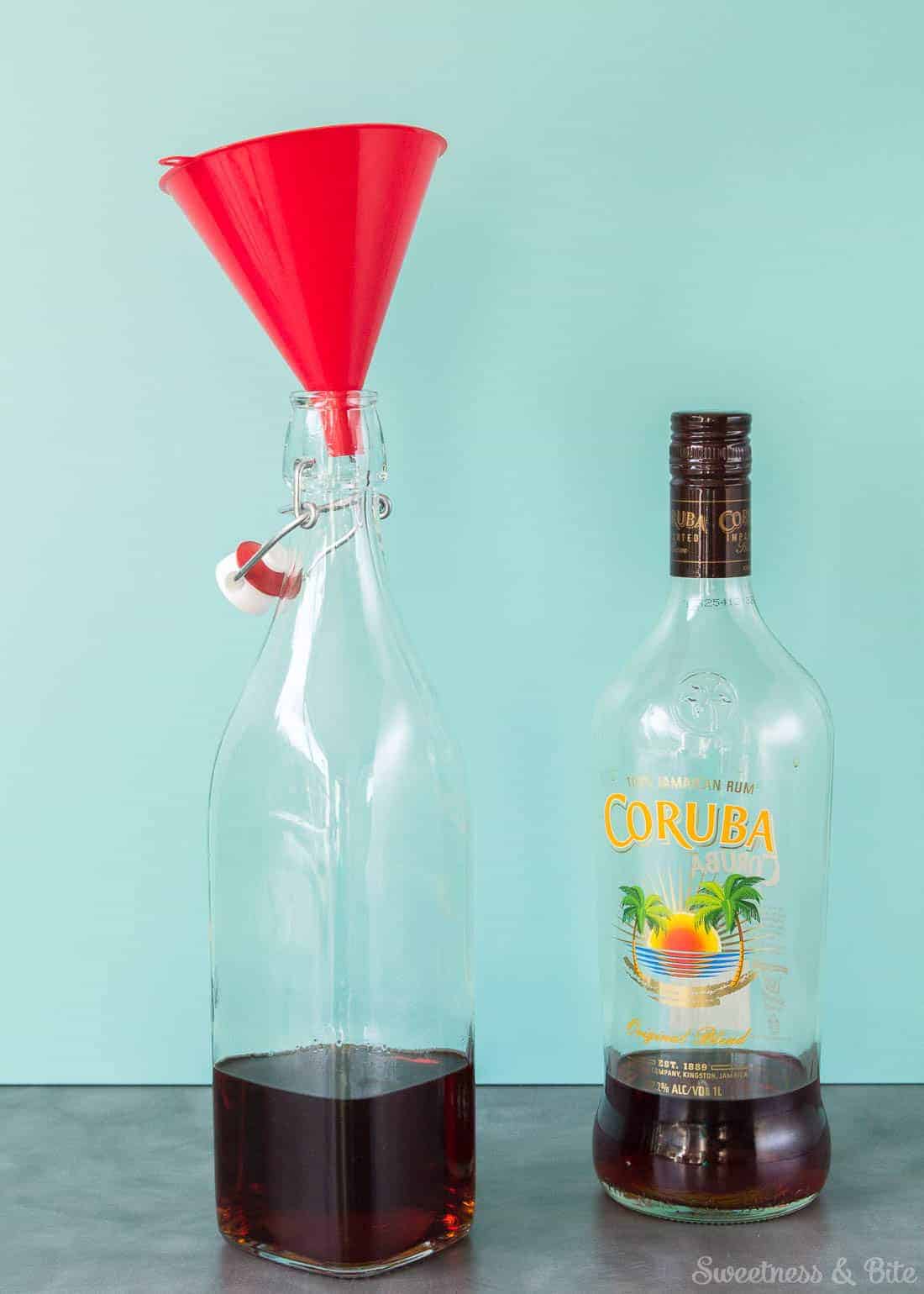 Pop your vanilla beans into the bottle, split end down. This will make it easier to remove the beans from the bottle when you’re done with them.

Shove ’em all in. 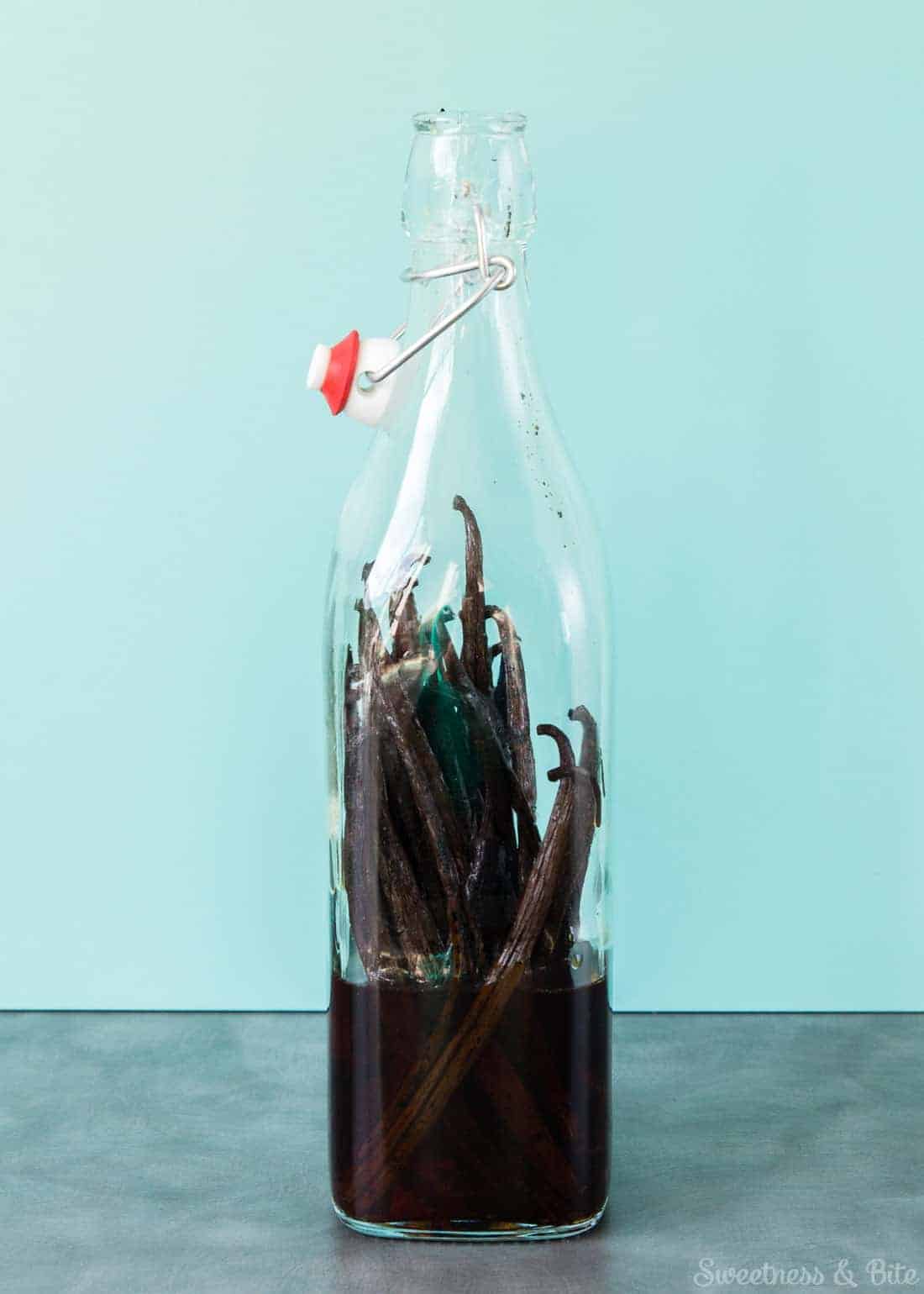 Then top up the bottle with vodka. 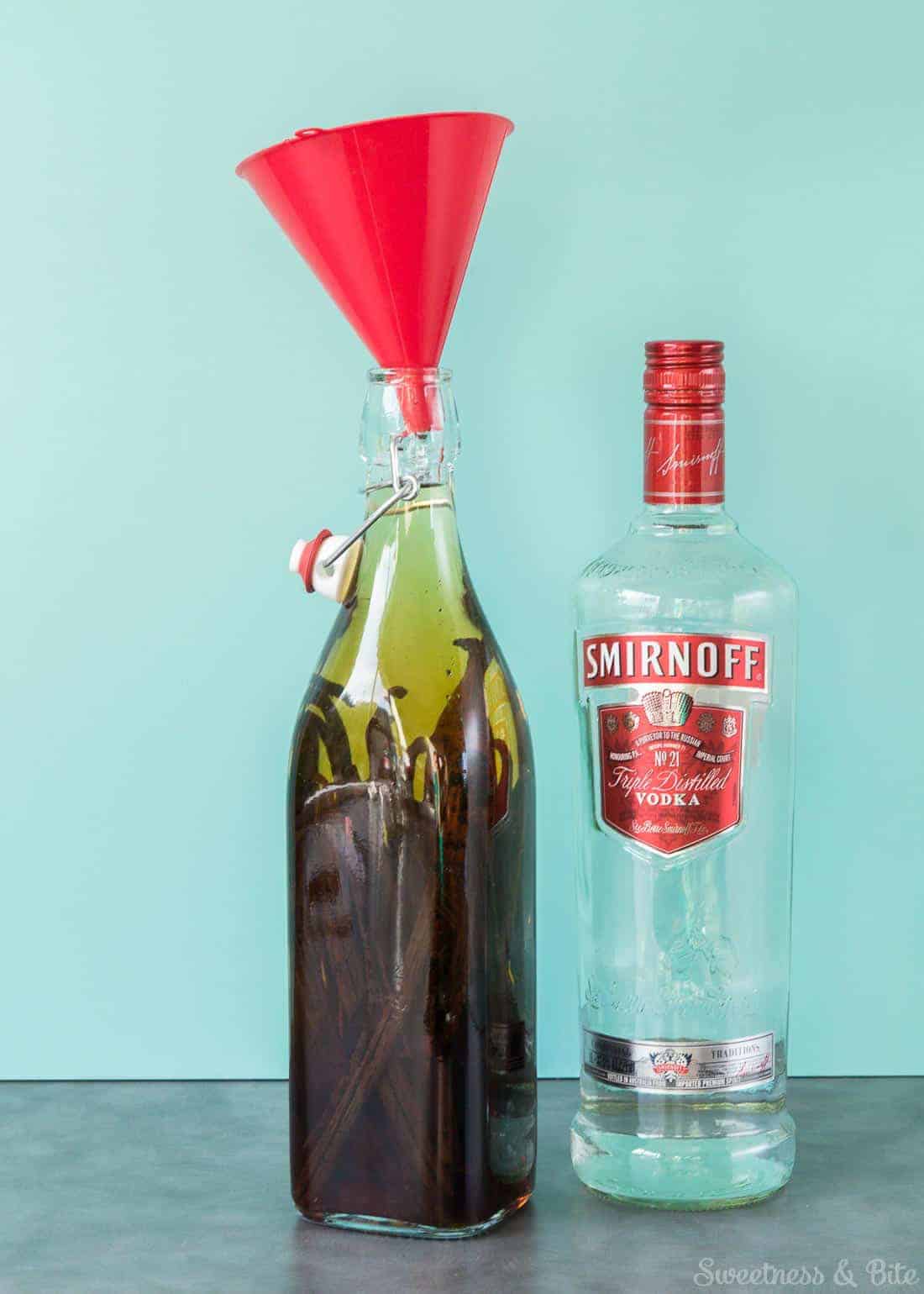 Then all that’s left to do is clean off any seeds from around the top, and put the top on the bottle. 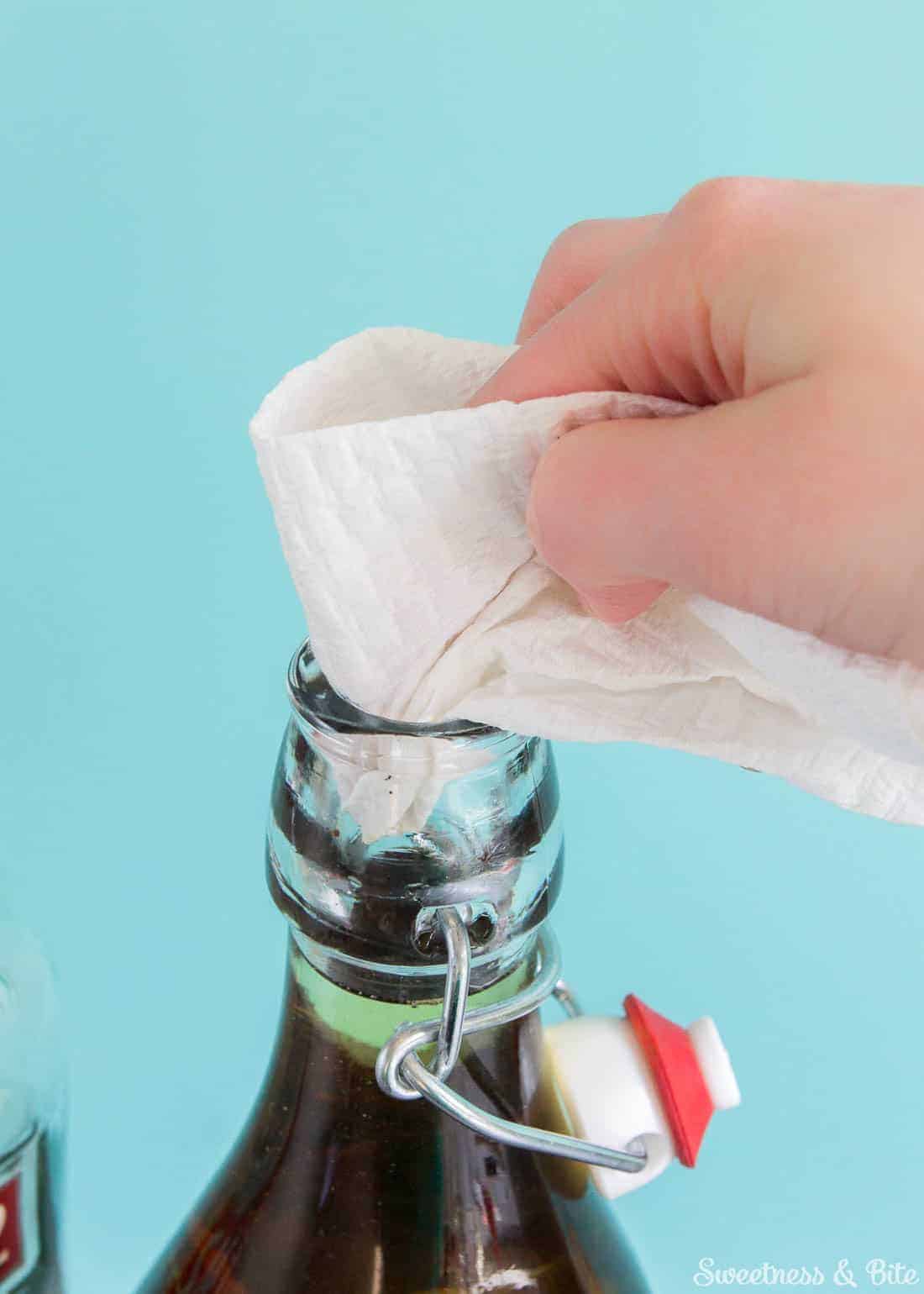 Give it a good shake, then pop it in a cool dark place. Shake it as often as you remember to. Once a week is ideal, but if you forget don’t worry, it will be fine.

Now is the hard part, waiting for it to be ready. Some extract recipes say you can use it in as little as 6 weeks. I personally find that the flavour is nowhere near developed enough at this stage, the alcohol smell is still pretty overwhelming, with the vanilla smell trailing way behind. I would say it needs to sit for a couple of months, minimum. Give it a sniff after this time and if the vanilla scent is the one that hits you first then it’s ready to use. If not, wait a bit longer. I like it best when it has sat for 4-6 months.

If you want to give some extract away as a gift before it has had sufficient sitting time (hello last-minute gifts), then simply pop a note on the label to say when it will be ready.

If you’re interested to see the colour changes that a vodka-only extract goes through, then check out this (somewhat badly captured) photo. The first bottle is clearly (bad pun) a bottle of plain vodka. The second is just after adding the beans, and the third is the extract after six-ish months. 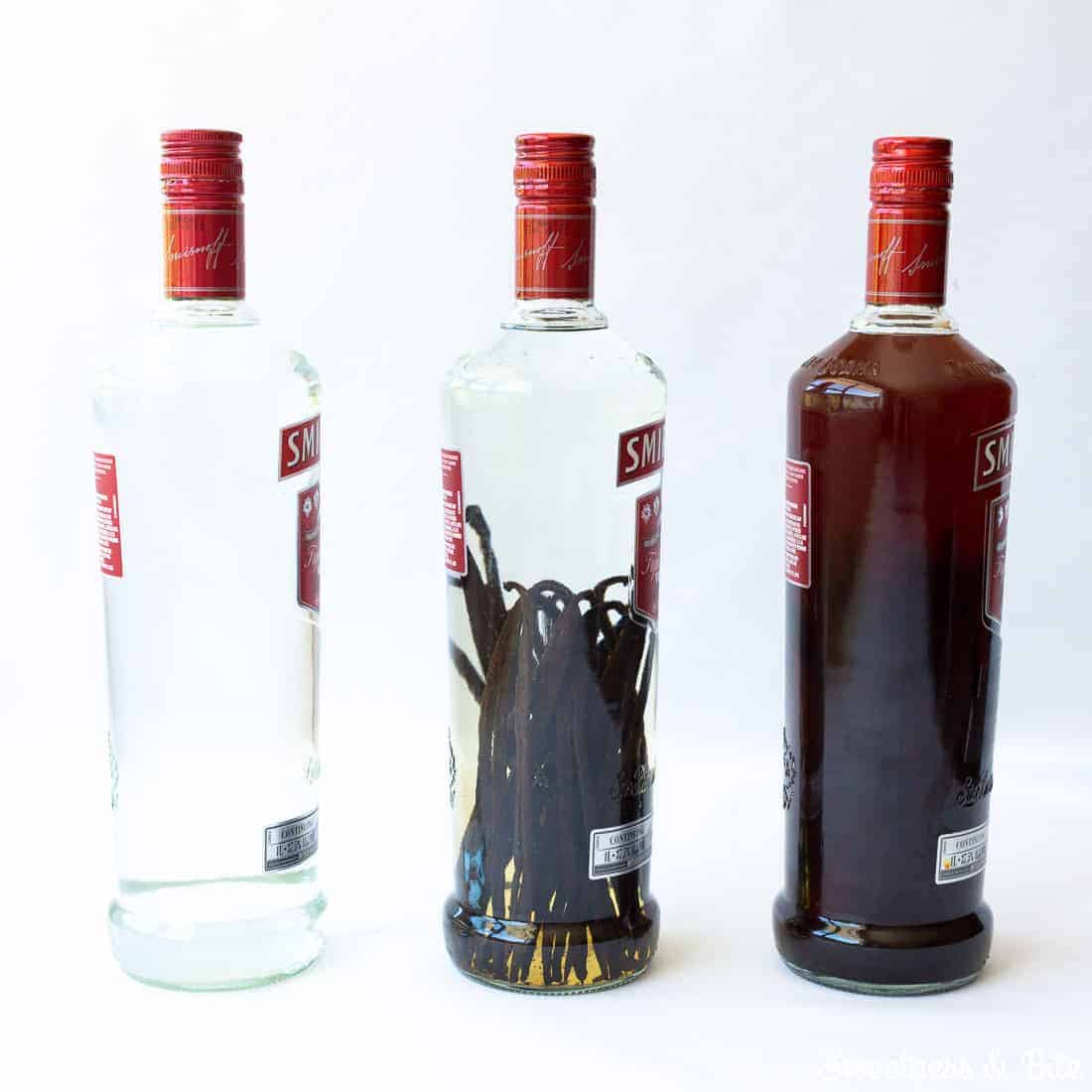 This probably goes without saying, but if you enjoy making cocktails, you will find just as many uses for this vanilla vodka as you would when baking with it. It’s also pretty good just splashed into a glass of Coke with a handful of ice, as a grown-up vanilla Coke.

Don’t ask me how I know this. I won’t tell you.

It's a good idea to label your bottle with the date you made it, so you know when to start checking it. If you're experimenting with different alcohols, different vanilla beans and different numbers of beans, then make a note of that too.

This recipe makes 1 litre of vanilla extract. You can scale this up or down to whatever yield you'd like, just use 1 part rum to 3 parts vodka, and use at least 5 vanilla beans for every 250ml alcohol.

If you want pure, unadulterated vanilla extract, just replace the rum with more vodka. Although in this case, I definitely suggest being an adulterer. 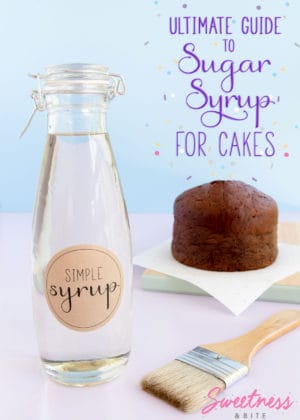 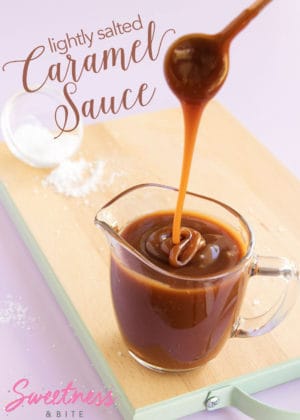 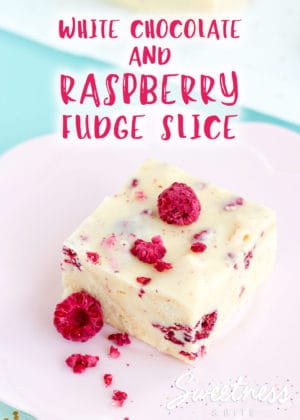 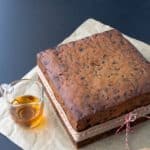 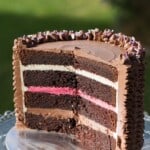 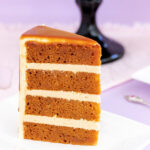 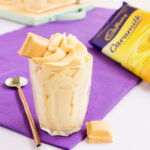 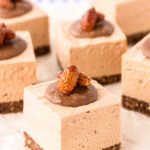 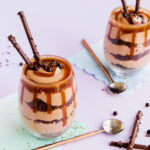