If there are two things I love in this world (aside from cats, and pyjamas, preferably cuddling a cat while in my pyjamas) it’s cakes and shiny things.

Even better when those last two things come together, shiny things on cakes. Which is why I wanted to tell you about this little trick – how to make the shiniest edible metallic paint. 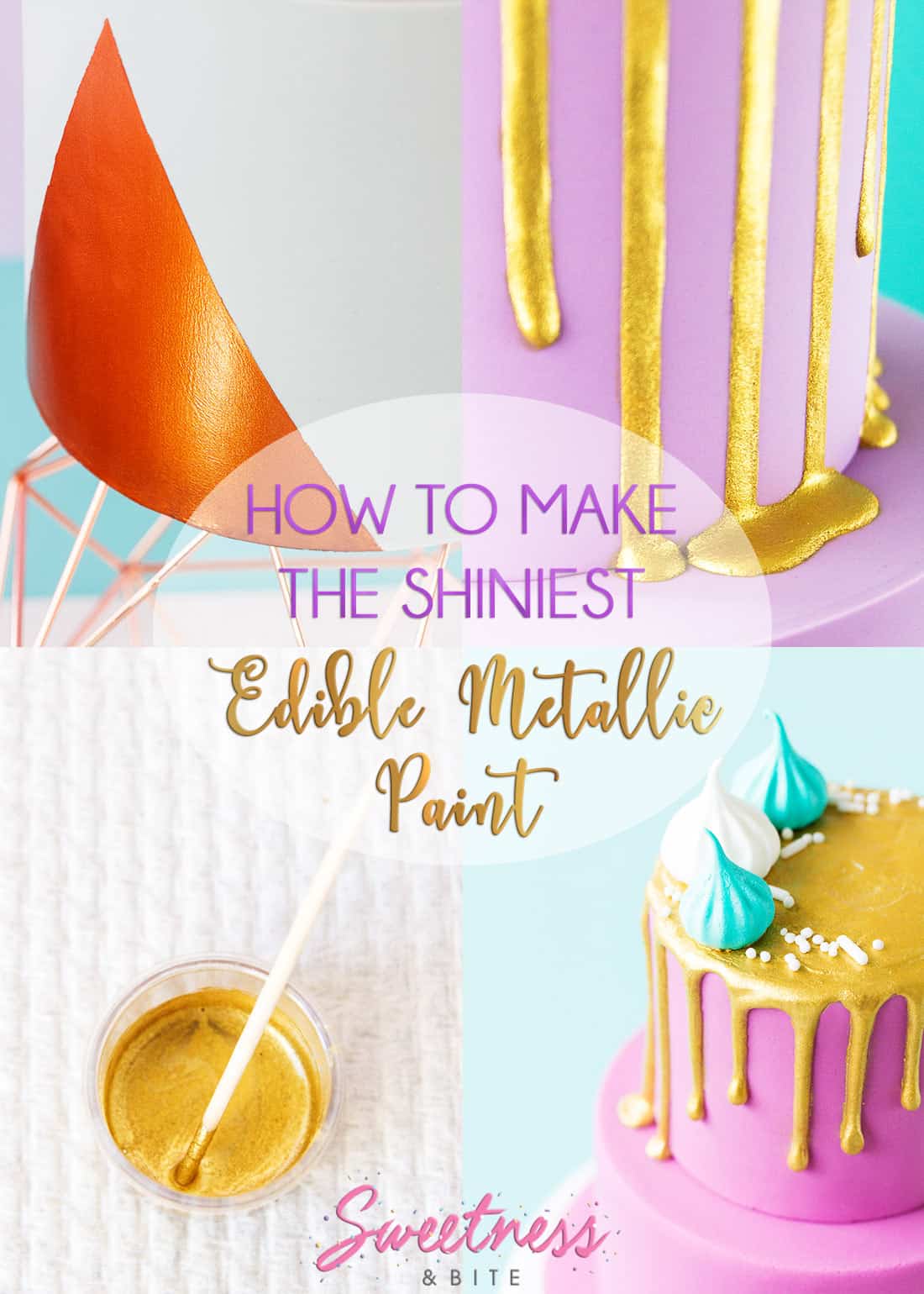 I discovered this way of making extra shiny metallic paint quite by accident, while making a gum paste drum kit for my honorary Grandad’s birthday. His drum kit is kind of a deep red metallic colour with a high shine finish and I knew I wanted to match it as closely as possible and get it as shiny as possible. I had a can of edible glaze spray, so my initial plan was to use the usual lustre powder mixed with alcohol as a paint to give the colour, and then glaze over the top for shine. But because the lustre+alcohol tends to transfer off onto your hand (or anything else it touches) I was concerned that the colour would smudge off onto the black, white or silver details on the drums.

Then it kinda hit me all of a sudden, couldn’t I just mix some glaze directly into the lustre, and use that as my paint? I had half a bottle of confectioner’s glaze so I did a test paint with the glaze and lustre, and to my delight, it was perfect! Super shiny, and the glaze completely sealed in the lustre so it wouldn’t transfer.

And even better, because it dried so well and so quickly, I could do multiple layers of paint to build up the depth of colour, without the issues you get with lustre and alcohol- where it just smudges and smears when you try to add more layers. Perfect!

What’s not perfect is this photo of the drum kit topper taken with my phone, because not only did I run out of time to get photos of the cake before we took it to the party, I also struggled to take photos in the dim lighting, then forgot to take my camera when we specifically went round to Bill’s place the next day for me to take picture of the drums. Took my backdrop boards, but not my camera. I know what you’re thinking, and you’re right, I am an idiot. So you’ll just have to trust me when I say the red metallic paint looked really good. 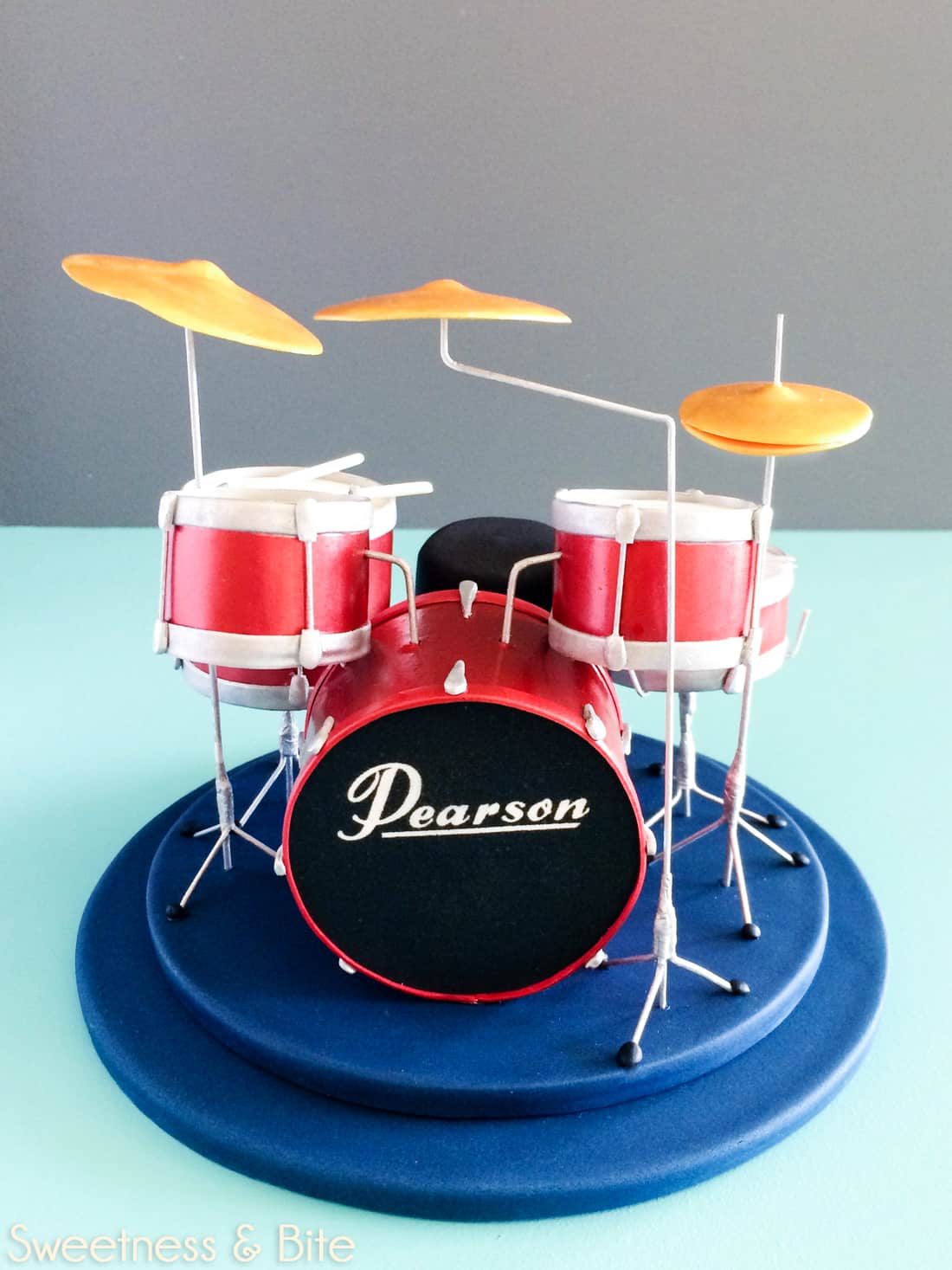 Since then, I’ve taken every opportunity possible to use this super shiny paint. You may have spotted it in my Mini Drip Cake Tutorial. So far I’ve used it on fondant, gumpaste and ganache and it works perfectly. I haven’t yet tried it on buttercream but when I do, I’ll let you know how it goes.

But before we talk about how to actually make the paint, there are a couple of things I should mention.

This is, under the perfect circumstances, an edible paint. The confectioner’s glaze is edible, and if you use a food-grade lustre, then obviously that is edible too. There are a couple of ‘buts’ you need to keep in mind though.

Edible glaze is a food grade shellac, made from a resin created by an insect. For food purposes, the resin is mixed with alcohol to make a glaze, and this glaze is labelled by the US FDA as “generally recognised as safe” for consumption. Before you get too weirded out, it is used in many manufactured foods, including (according to Wikipedia) Jelly Belly’s jelly beans, and Hershey’s Whoppers and Milk Duds. It’s also used as a coating for pharmaceutical tablets and capsules.

Because the shellac is made from the byproduct of an insect, it can’t be used on vegan cakes, and because it contains alcohol, if a person doesn’t consume alcohol for religious or personal reasons then this paint is obviously not going to be suitable for them.

You also need to make sure you buy and edible grade lustre, which can be a (potentially) contentious issue, depending on where you live. There are many metallic lustre powders which are considered safe for food contact only – not for consumption. There are others that are considered edible because they are truly edible and digestible. Some are labelled non toxic because they will pass through the digestive tract without being digested, but obviously without poisoning you either.

It will also depend on where you live as to whether you can use a particular lustre colour. For instance the metallic powders that I love and will talk about more below, Rolkem, are classed as edible in New Zealand (where I live) and in Australia. However they have not yet been approved as edible by the US FDA. This means that there it can only be used for elements that will be removed before consumption. You can check out a great post on “The Best Edible Metallic Food Colours” by Elizabeth Marek of Artisan Cake Company for some comparisons. If there is a colour that you really love and want to use but can’t because it isn’t considered edible, then have a think about using it on design elements on your cake that can be removed before the cake is eaten.

Right, now that we’ve got that out of the way, lets talk about actually making the paint.

You’ll need three ingredients, your lustre, your glaze, and some cake decorator’s alcohol.

The lustre I used here is by Rolkem, and they are by far my favourite metallic colours. They have two shades of gold that I really like, the Super Gold (which is what I used in the photos below) and Special Gold. The Super Gold is slightly darker than the Special Gold (which is my personal favourite), but they are both very shiny and have a slight sparkle to their metallic sheen. In the image above, the top right gold drip was Special Gold, and the bottom right one is Super Gold. Rolkem also make Super Silver, Bronze and Copper (top left in the pic above). 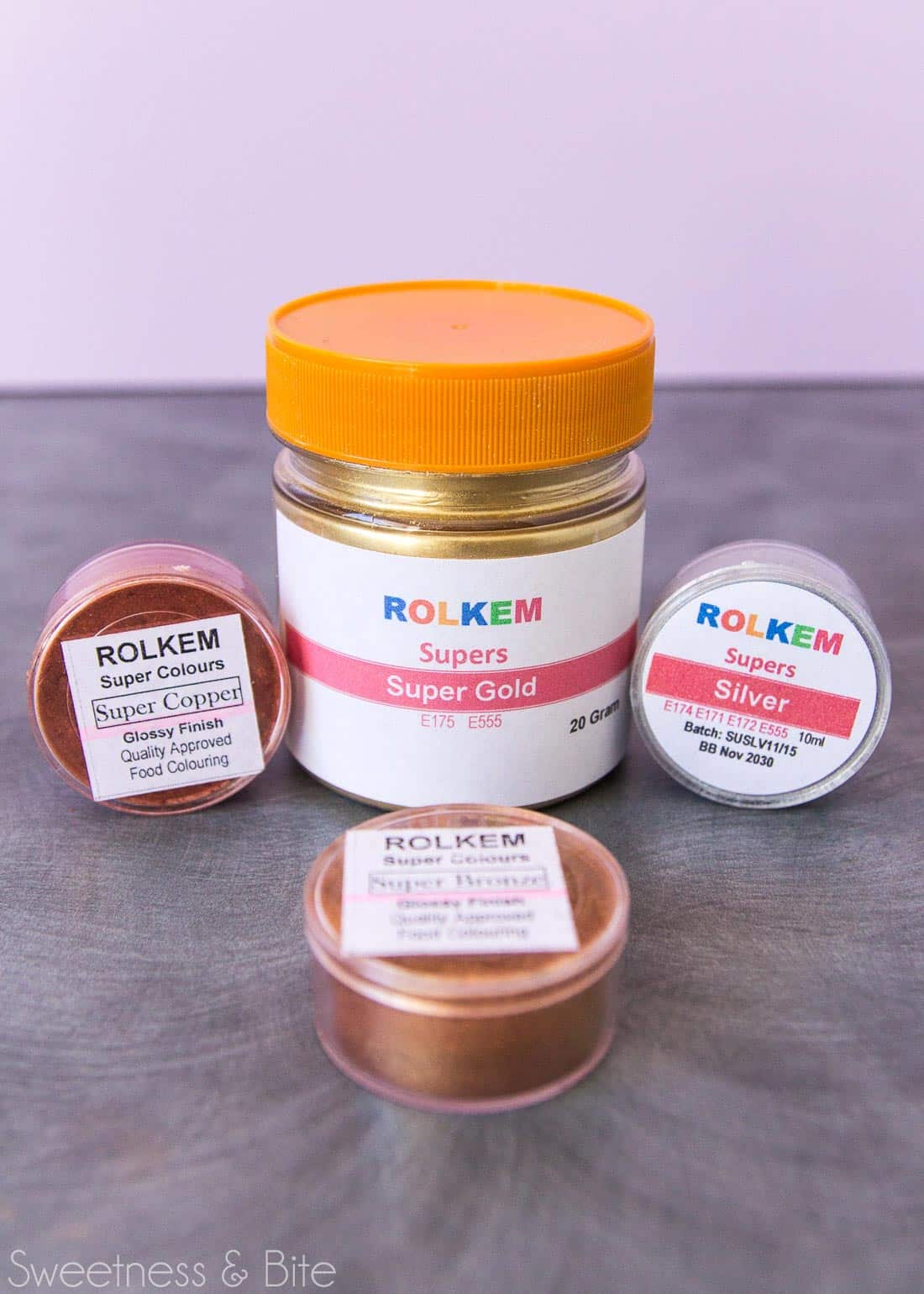 The glaze I use is made by Caroline’s Sugar Art. I bought a dropper lid for my bottle of glaze, this makes it really easy to just get the amount you need, and also because you’re not pouring straight from the bottle, you won’t get glaze on the neck of the bottle, which will then dry when the lid is on, making the lid impossible to get off. Not that I know that from experience or anything. 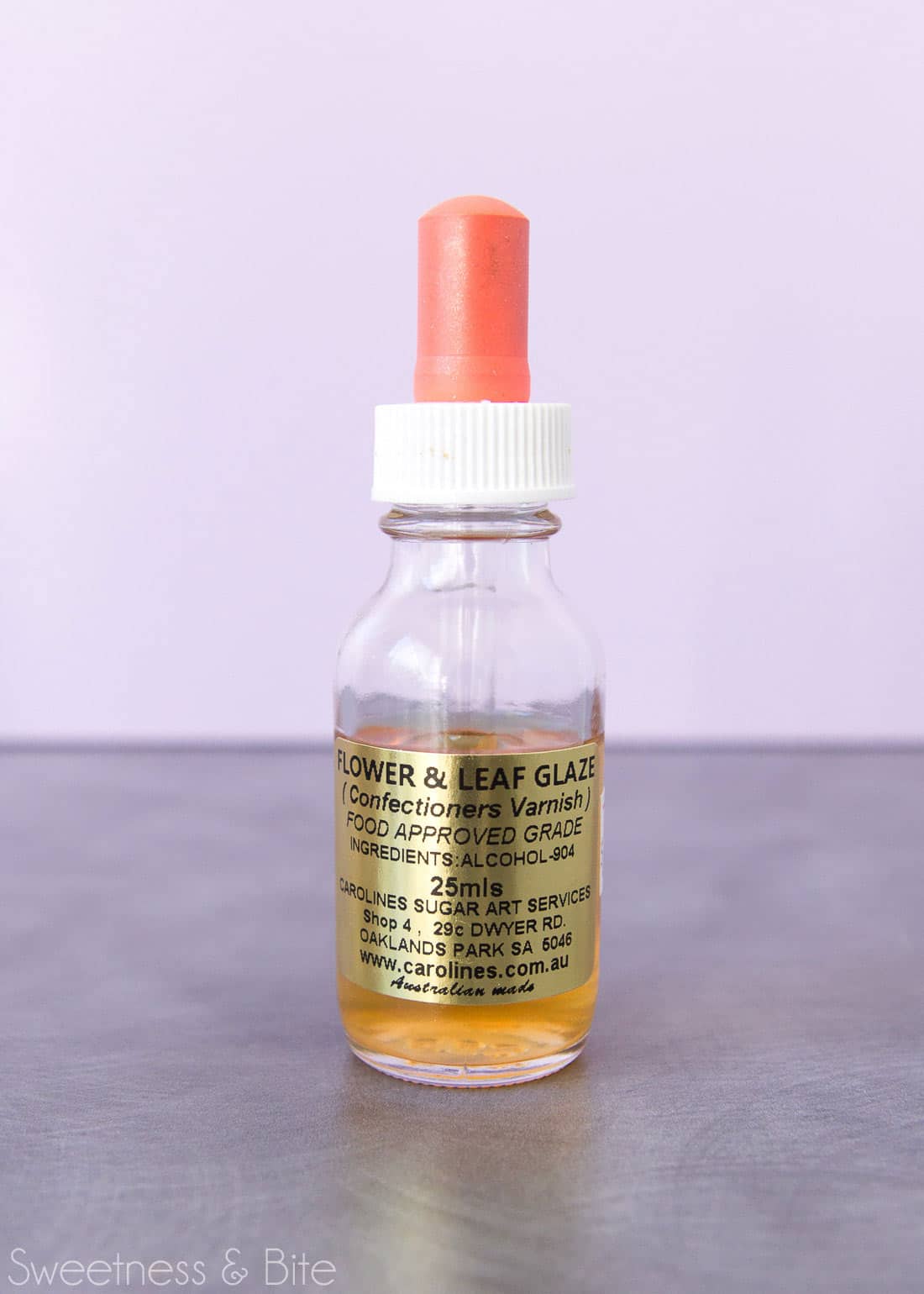 The one thing you need to remember with this glaze is that it is soluble in alcohol only. You can’t clean it up with water or soap.

Which leads me to the third ingredient in this paint, which we use to both thin the paint and to clean up afterwards – cake decorator’s alcohol.

I love cake decorator’s spirit because it’s 95% alcohol and easy to get from cake decorating suppliers in New Zealand, (I’ve been told that in the US, Everclear and high quality lemon extract are also good options). The alcohol evaporates as the paint dries, so no one is going to get tipsy off it. You really do need a super strong alcohol here, a weaker alcohol like vodka won’t dissolve the glaze.

You’ll also need a few tools and such. A small container or jar that you can mix the paint up in – make sure this isn’t a container you mind chucking away, otherwise you’ll use half your bottle of alcohol trying to clean the container. Just use something you can biff when you’re done.

You’ll also need a dropper/pipette for the alcohol, and also another one if your glaze doesn’t have a dropper lid.

And then obviously you’ll need a paintbrush to apply it with. Or a sponge, if you want to go with a sponged look (a sponge is also good if you want to use it over a stencil). Also, while I totally forgot to add them to the line up for the pictures, a few toothpicks will come in handy too, for mixing up the paint. 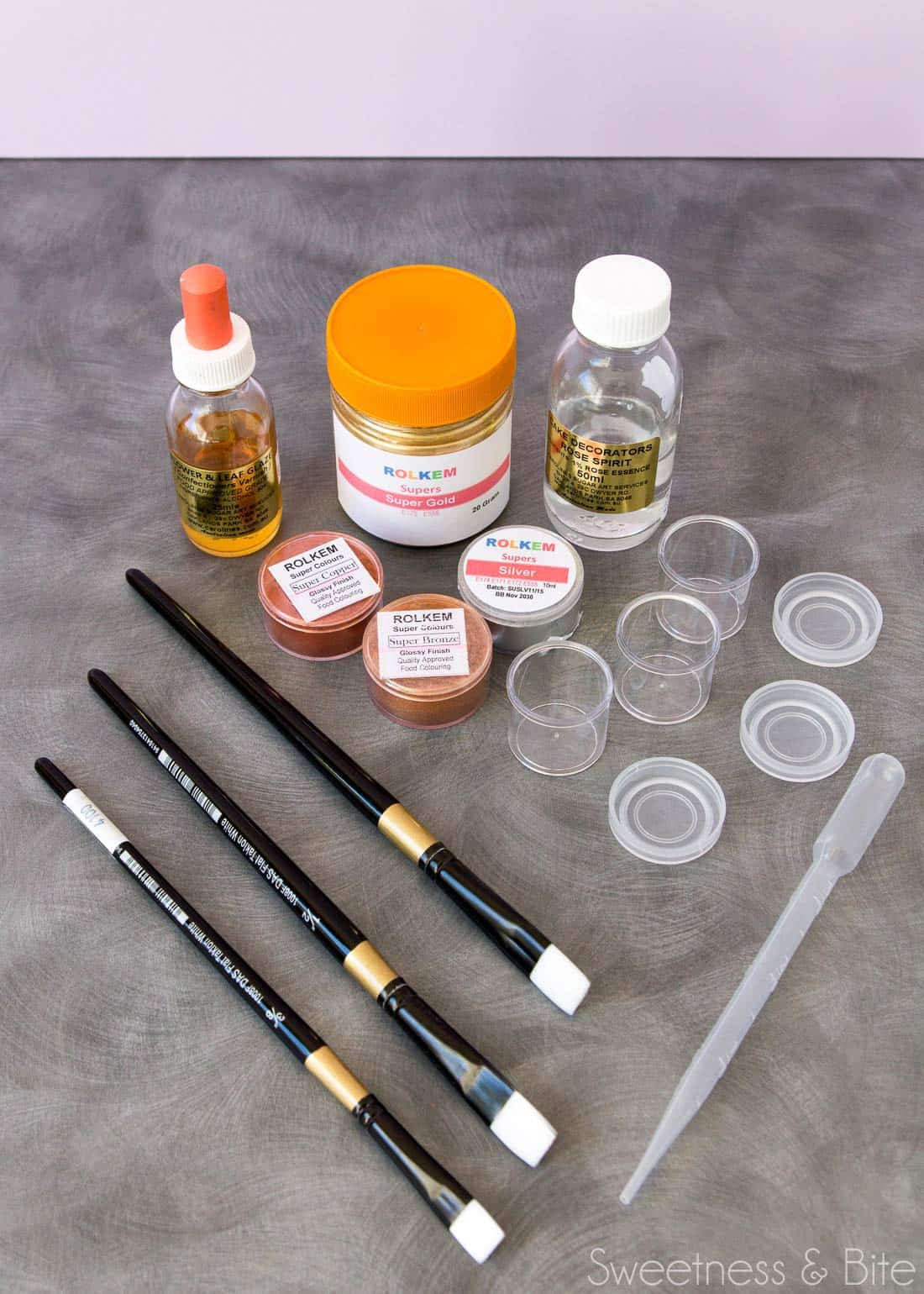 Making the actual paint is crazy easy. Pop some lustre into your container… 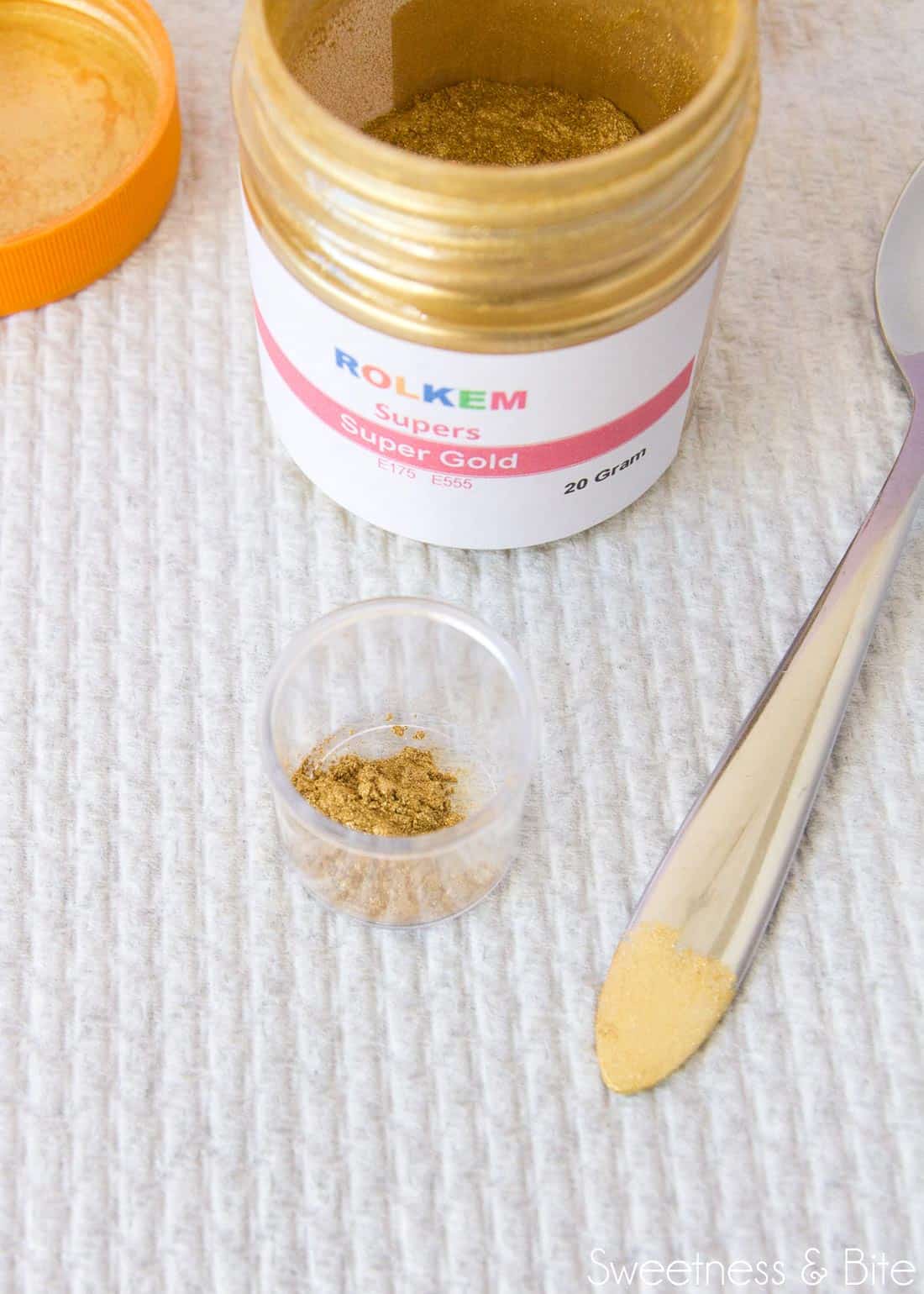 Add a few drops of glaze… 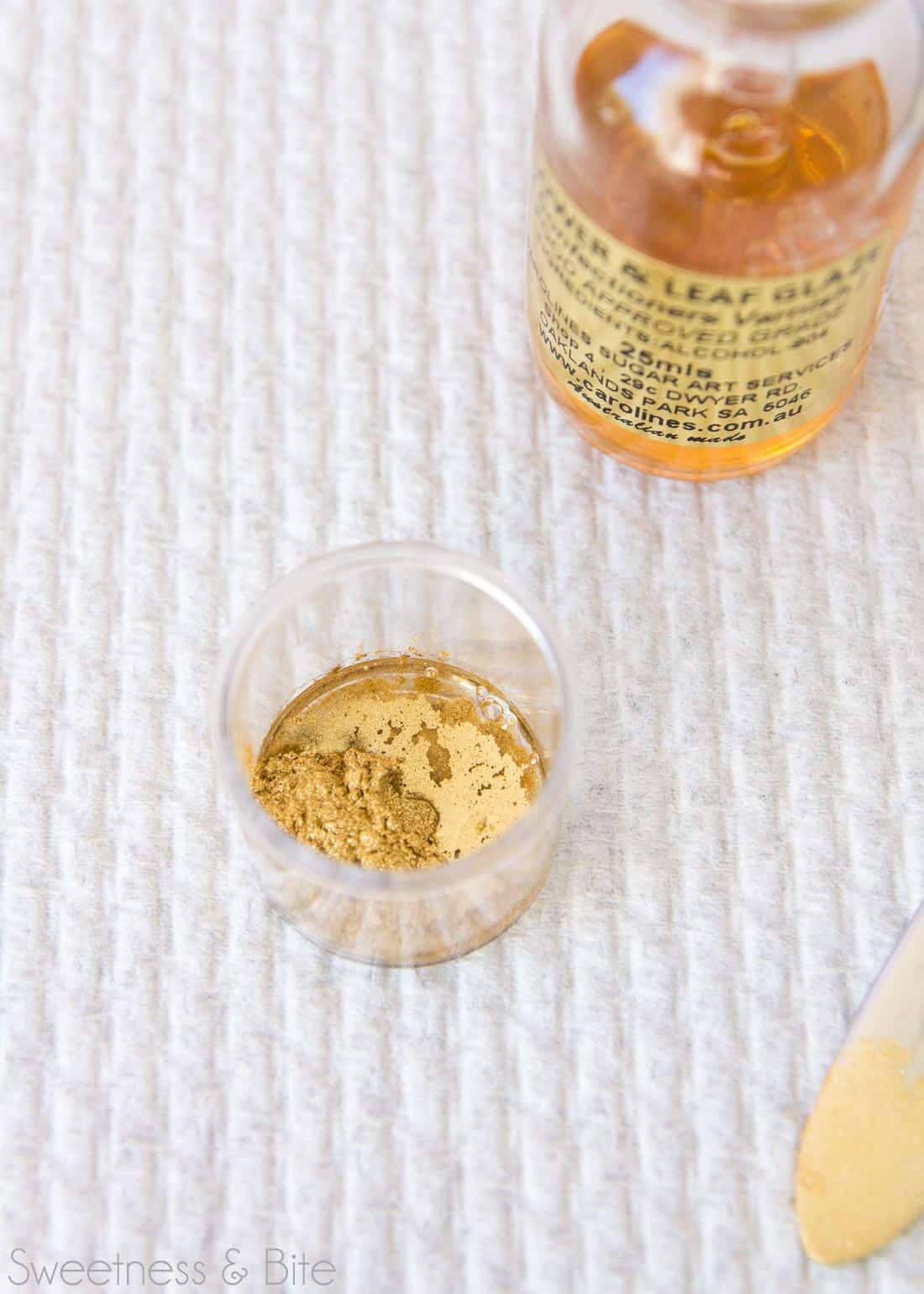 And give it a mix. 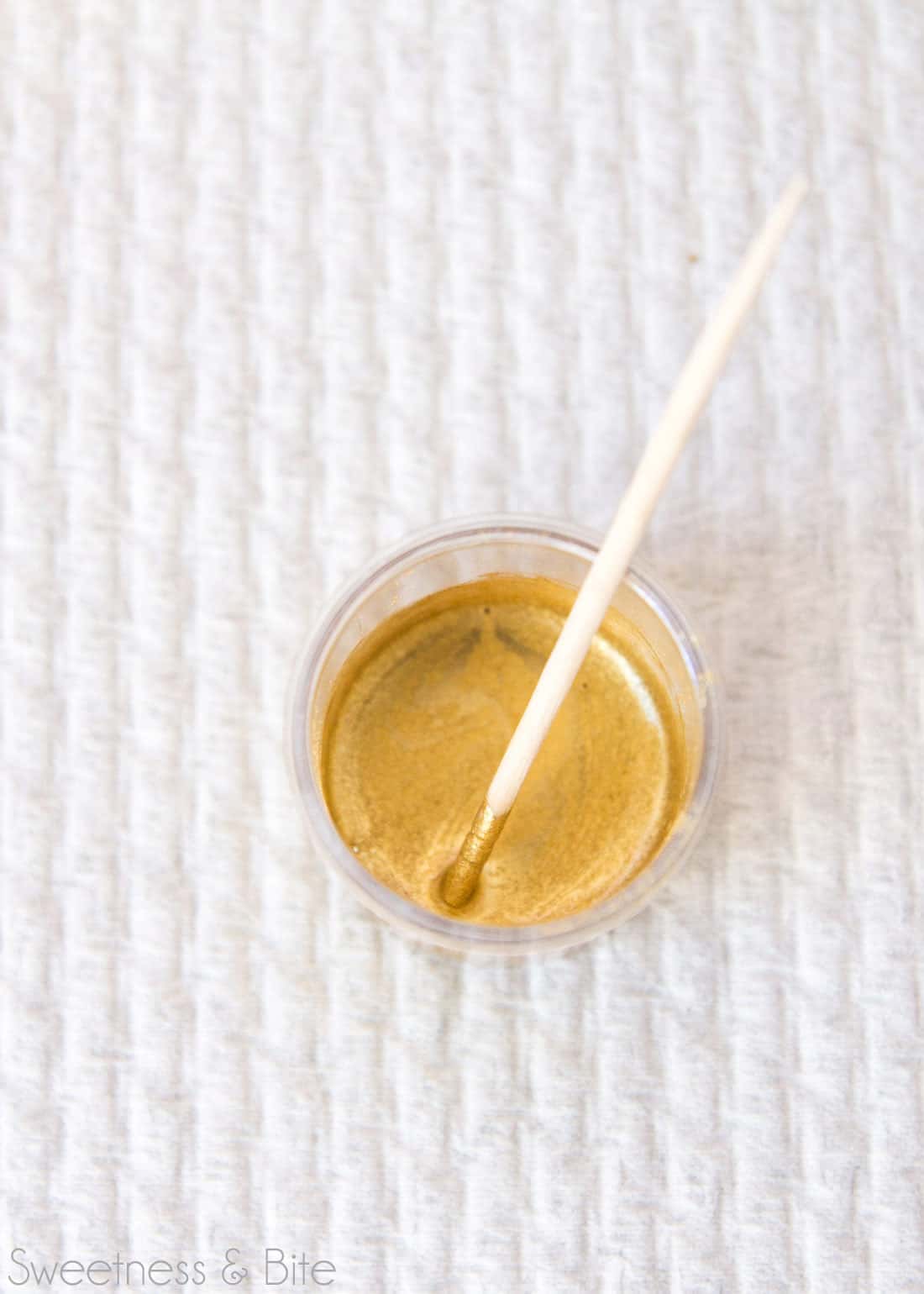 If the paint seems too thick, add a couple of drops of alcohol to thin it down. 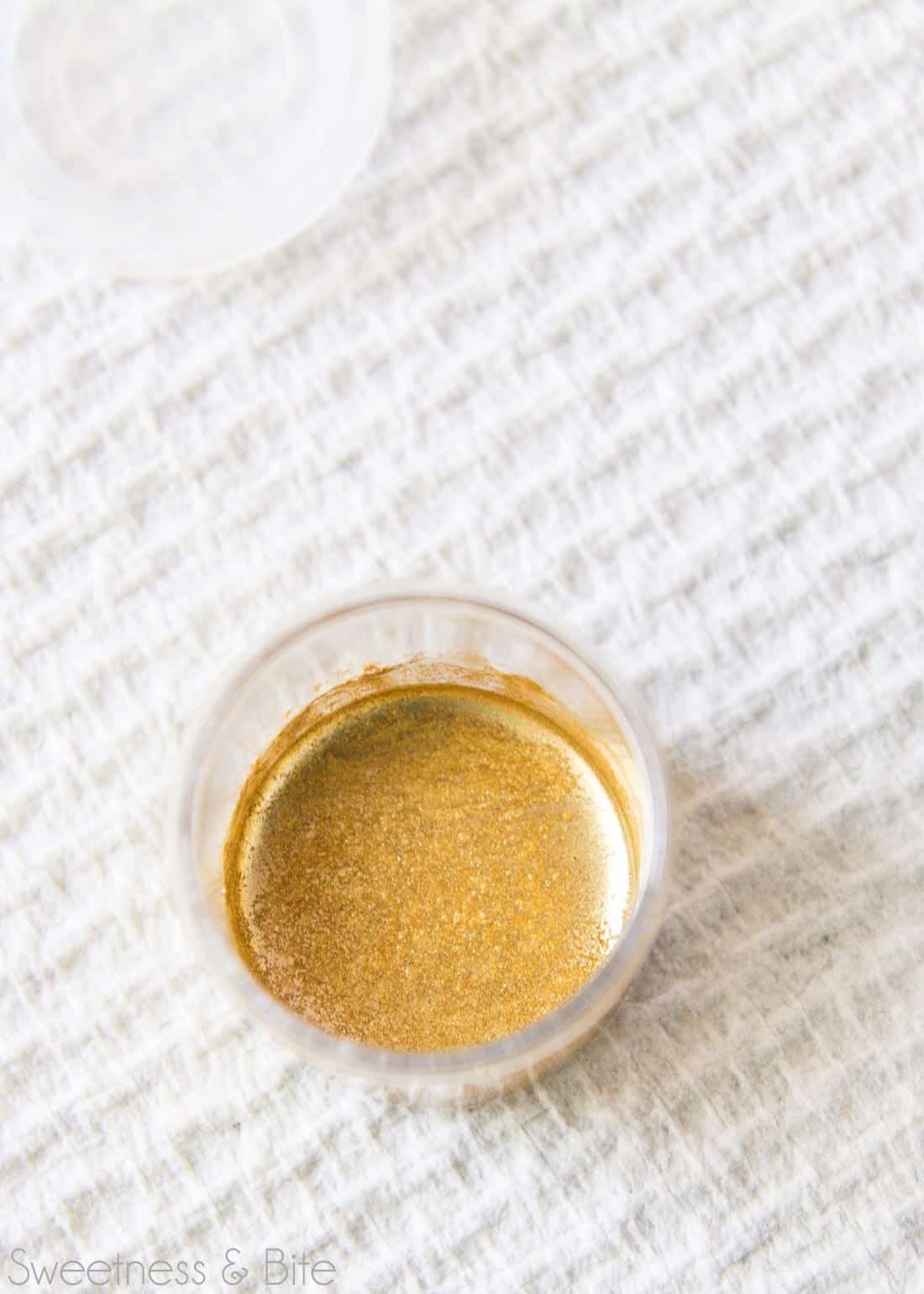 Once you’re done painting, just pop some alcohol into a bottle or container, and swish the brush around to clean it. 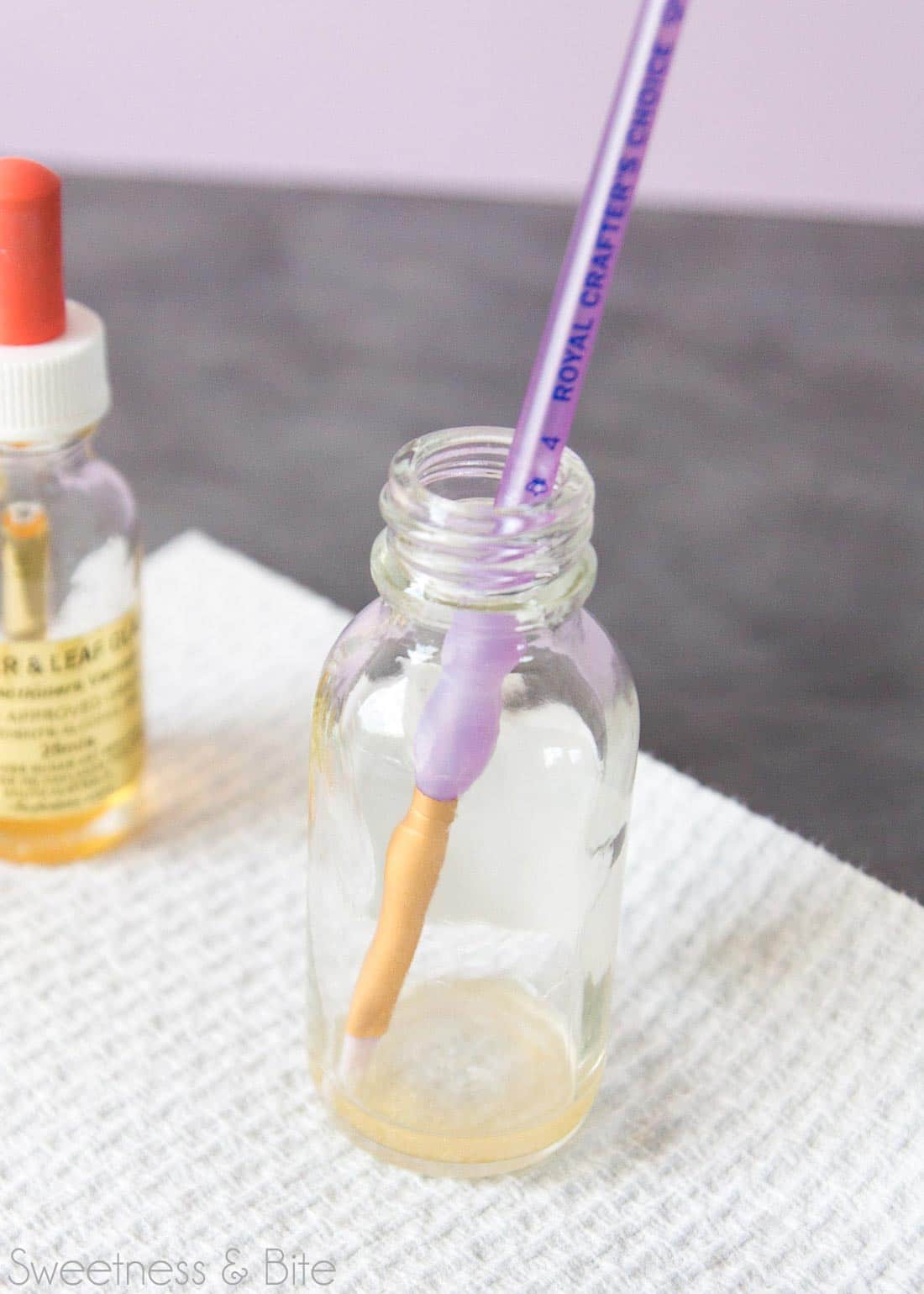 For those of you who like to see things in video form, here’s a snippet of my Mini Cake video, in which you should be able to see the proper consistency of the paint. 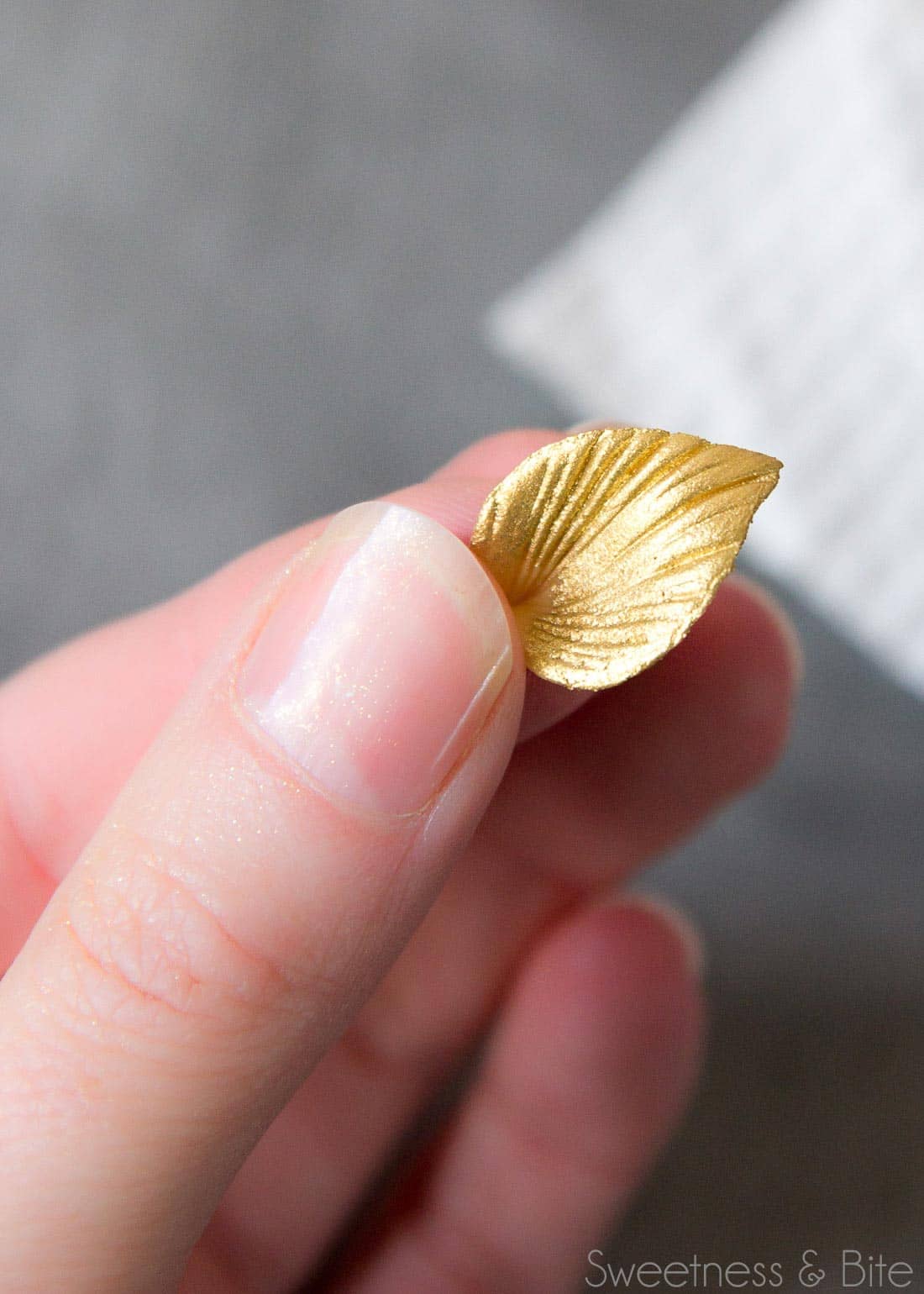 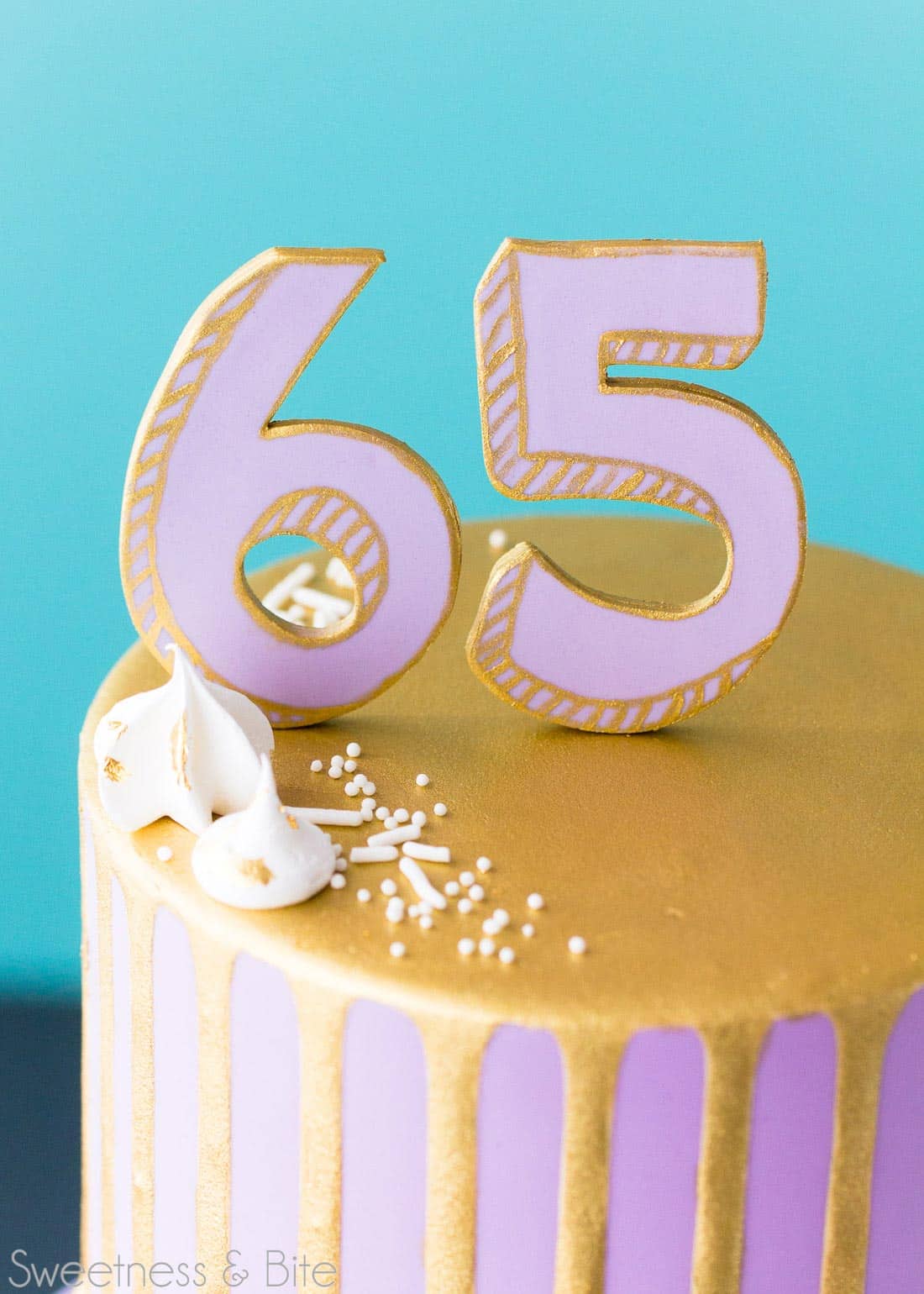 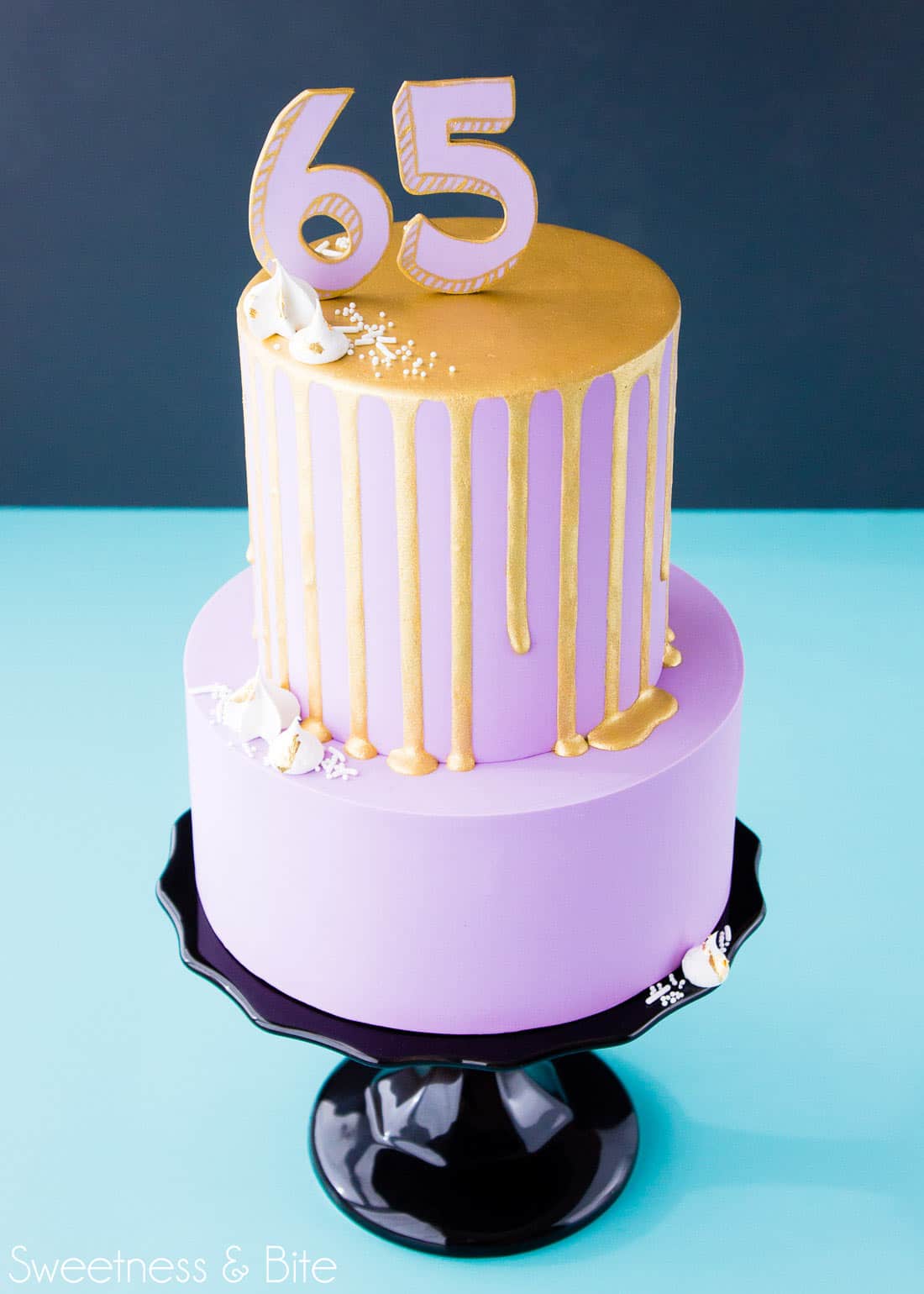 What’s your favourite metallic paint? If you tried this one, what did you think?