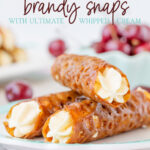 If you’re a fan of whipped cream and you’re currently on any form of low-calorie or low-sugar diet, then I suggest that you don’t read any further.

It’s not that I don’t want you here, I really do. But once I introduce you to these gluten free brandy snaps and the whipped-cream-that-is-even-better-than-whipped cream that I filled them with, your diet will be over, and I just can’t handle that kind of responsibility.

For those who are willing to be corrupted, read on…

Brandy snaps were often one of our family Christmas desserts until we started requiring gluten-free sweets, and since gluten free brandy snaps aren’t available at the supermarket like the trusty old Ernest Adams ones, we didn’t have them a fair few years.

They seemed to be the kind of thing that would be hard to make – you know, the sort of thing that’s nice to buy and eat, but you’d never make them yourself.

Then I finally had a desperate need to have them again, so I tried making them myself, with gluten free flour. If I had known before just how easy they were to make, I’d have been making them every year!

If you haven’t had brandy snaps before, they are thin, crunchy, delicious little tubes made with golden syrup and lightly spiced with cinnamon and ginger. While the snaps are still warm they’re shaped into a tube, and when they’re cooled you fill them with whipped cream.

I always assumed that there was brandy in brandy snaps but apparently often there is not, and you’re actually supposed to eat them with a glass of brandy. Plus I guess the name ‘ginger snaps’ was already taken.

But before we get into how to make these gluten free brandy snaps, let’s talk about this whipped cream for a minute. If you didn’t think it was possible to have whipped cream that is even better than whipped cream, then I’m about to Blow. Your. Mind.

The creation of this cream was a bit of an accident really. See, my Mum and I make gluten free tiramisu every year for Christmas lunch, but one year we couldn’t find the usual recipe in amongst the recipe jumble. After a quick Google search, she found one that looked good. She usually makes two separate tiramisus- a regular one and one with the sponge fingers dipped in a hot chocolate mixture instead of espresso for the non-coffee drinkers, and we weren’t sure if the recipe would make enough filling for two desserts.

So what do you do when you’re not sure how much of something a recipe makes? You triple it, of course.

Turns out doubling it would have been more than enough.

So there we were with a large container of leftover tiramisu filling in the fridge (and by left over, I mean there was still a whole lot left after my parents, my aunty and I were done spreading it on the leftover pieces of the gluten-free sponge I’d made… *cough*, quality control, *cough*)

On Christmas Day, when I was whipping cream to fill the brandy snaps, I spotted the container of Tiramisu filling in the fridge, and figured why not add a bit of that good stuff to the cream?

I cannot even believe how right that was. You might think that those ingredients would make the cream too rich, but in fact, it is the total opposite, they make a whipped cream that is silkier and smoother and somehow even lighter.

Add in a healthy dose of vanilla paste (I love the Heilala vanilla paste!), and you have the ultimate whipped cream.

So I came up with a from-scratch recipe using the egg yolks and mascarpone, added to lots of softly whipped cream, and it really does make the perfect filling for these lacy little tubes.

The snaps can be a little fiddly to make, but once you’ve worked out how long they take to cook in your oven and after you’ve rolled a few, then you can churn through a batch pretty quickly.

Because they need to be shaped while they’re still warm, you can only bake one tray (four snaps) at a time, but they don’t take long to bake and if you place a new tray in as you take the previous one out then you get a little production line going and it doesn’t take too long.

On Christmas, my Mum and I make them together, so we each roll two on each tray, and never have any problems with the snaps cooling too quickly. So if you can, grab a friend! Nothing like a bit of team effort in the kitchen.

I use non-stick cannoli tubes to shape my brandy snaps, but if you don’t have tubes then you can use the thick handle of a wooden spoon. Ideally, you need four of whatever you’re going to shape them around, if not then you may need to warm the snaps back up if they cool down and harden before you’ve rolled them.

And of course, if you don’t want tubes, you could shape the snaps into baskets over an upturned muffin tray or some small bowls to make gluten-free brandy baskets. Or leave them flat and layer them up with cream and fruit. They’re super versatile!

And then shove them in your face!

The gluten free brandy snaps are best eaten soon after they’re filled, so they don’t get too soft and chewy. But trust me, eating them quickly is no trouble whatsoever…

For the Brandy Snaps

For the Ultimate Whipped Cream

It's best to fill the brandy snaps with cream just before you eat them, but unfilled snaps can be stored in an airtight container at room temperature for a week or so.

Since the snaps need to be shaped while warm, only bake one tray at a time. To keep things moving, as you remove one tray from the oven place the next tray in (and re-set the oven timer). This way you can crank out one tray every six or so minutes.

I used brown rice flour and tapioca flour, but you could try these using your favourite gluten free flour blend.

If you don't need the brandy snaps to be gluten free, replace the brown rice flour and tapioca flour with 100g of plain flour.

The nutritional information above is computer-generated and is only an estimate. Please do your own research with the particular products you're using if you have specific health needs or are following a special diet.

And if you happen to have any whipped cream leftover it happens to make the perfect dip for my favourite fruit, cherries…