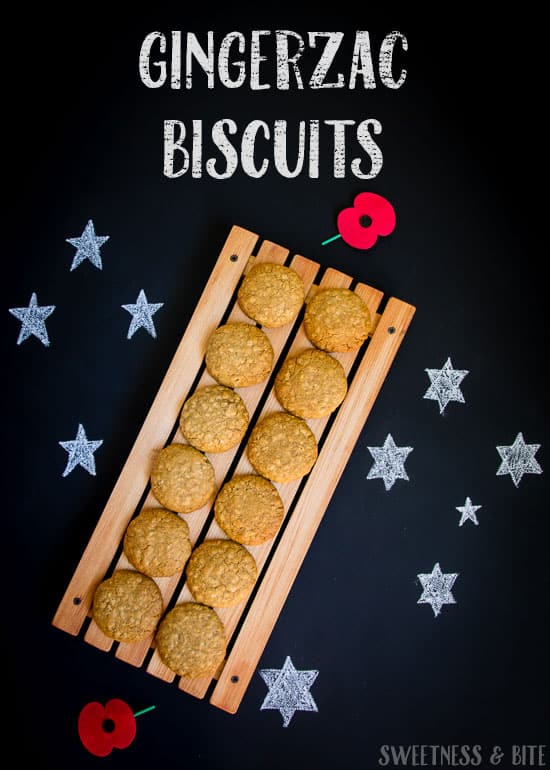 If you live in New Zealand and you’ve been watching the news or reading the papers the last few days you’ve likely heard the discussion surrounding our beloved Anzac biscuits.

If you’re overseas and have no idea what I’m on about, then let me break it down for you. Anzac biscuits are an oaty, golden syrupy biscuit (cookie) that is synonymous with the ANZACs (the Australian and New Zealand Army Corps who fought together during WWI) and the 25th of April which is the anniversary of the landing at Gallipoli and the day our two countries commemorate the sacrifices made by those soldiers 100 years ago.

But it turns out that the biscuit that for years people have thought was sent over to the troops, was, in fact, probably not sent there at all. Apparently they are actually too fragile, too perishable to have been sent that great a distance. The ‘real’ Anzac biscuits sent to the soldiers are likely to have been more like a Gingernut, a hard, spicy biscuit that would have been able to last during that long trip.

But despite their demotion from soldier sustenance, it seems the Anzac biscuits still played a part, they were baked and sold by the folks back home to raise money for the war efforts.

The problem with all of this talk about biscuits is that it suddenly gave me a massive craving for both Anzacs and Gingernuts, so I thought why not just end this little battle and combine the two?

These “Gingerzac” biscuits have the spicy flavour and crisp, crunchy edges of the gingernuts, with the oaty texture and chewy middle of the Anzac biscuits. I can’t tell you if they would last the trip to the front lines, since I suspect there won’t be many left to test.

They are easily made gluten free, and since they don’t require any eggs you could easily make them vegan by using a vegan butter substitute or margarine. Since my dad is able to eat oats I used them, but if you can’t eat oats then rice flakes would be a good substitute. 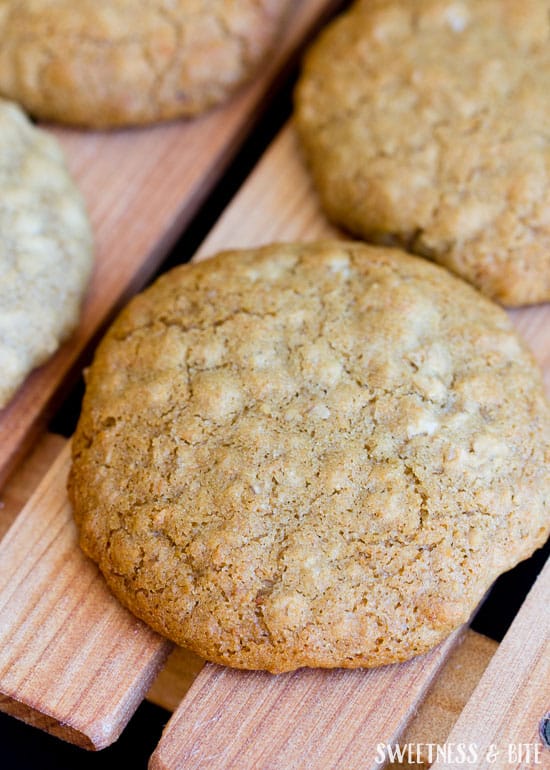 Not just a day to eat biscuits, more importantly Anzac day is an opportunity to remember those Aussies and Kiwis like my great-grandfather who have fought for their countries. While we commemorate on the anniversary of the landing at Gallipoli, we remember not just those men but all our defence forces who have fought in many other battles throughout our nations’ histories.

Last month my Grandma passed away, and the only two bright points in an incredibly hard couple of weeks were getting to see all my Aussie family, and the discovery of many letters and photos that my Grandma had kept, many of which none of the rest of us had ever seen before. This included some belonging to my great uncle who went missing and was presumed dead after his plane was lost over the North Sea during World War II. One of the letters was written to his parents as he prepared to start training. Some of the things he wrote in that letter in his early 20s had us almost in tears as we transcribed it. I wanted to end this post with a few sections from his letter.

“Well, luck may or may not be. The view I take is this. I am fated to die one day. It may be over Germany. If I miss flying the night I’m due for it then I’m bound to slip on a banana skin and break my neck that way. Believe me, that would be irony, bananas in England, but you will get the idea. All I hope is that I can get on and do a few operations first.

My life has been very pleasant right up to the moment. I know as much about NZ as most young chaps, sufficient to be sure there is the setting for an almost perfect earthly paradise. We have a great wee country if only the people would get a little more sense. Still, that’s up to you people who are left. You’ll get what you want. It’s been said that one of the main things in life is knowing what you want and where to get it. I hope NZ wakes up properly one day as she’s potentially perfect.

So, if you can follow my ramble you will get an idea of how I feel about things now. My dreams of future are sort of shattered and will be gone as you read, but after all, as dreams they were perfect. In life they would probably have many edges so are better as they are.”

Sift flour and ground ginger into a medium-sized bowl. Add the oats, brown sugar and coconut, and mix well.

Place the butter and golden syrup in a small saucepan over medium-low heat, and stir until the butter melts.

Measure the baking soda into a heatproof cup, pour in the boiling water and stir to dissolve the soda. Add to the butter and golden syrup, and stir. The mixture will bubble up.

Pour the wet ingredients into the dry and stir to combine. At this stage, if the dough is very soft and sticky you can refrigerate it to firm it up.

Roll walnut-sized pieces of dough into balls and place onto the trays, about 2" apart to allow for a little spreading. Gently flatten the balls with your palm.

Bake for 10-12 minutes. You can bake them a little less for softer biscuits, or a little longer for crunchier biscuits.

Allow to cool slightly on the trays before moving to a cooling rack to cool completely. Store in an airtight container.