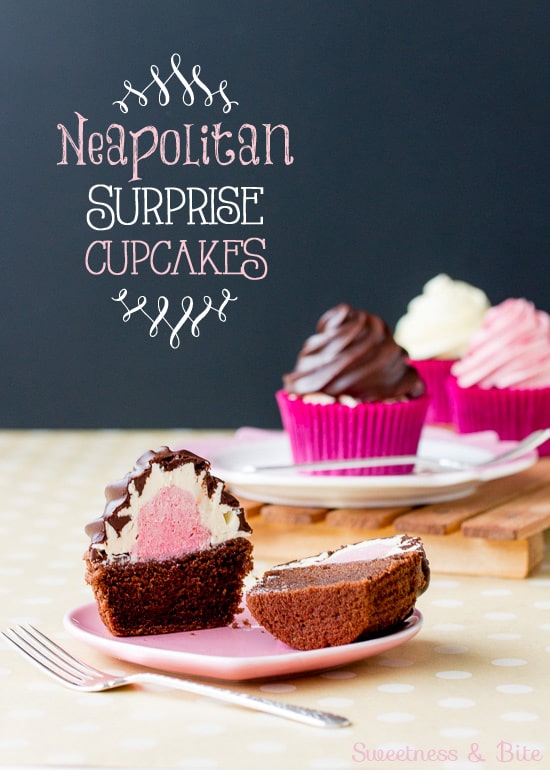 I was reluctant to call these cupcakes Neapolitan Surprise Cupcakes, because usually the idea of surprise food terrifies me.

I’m a pretty fussy eater, partly because my stomach has some issues with certain foods, and partly because I have a palate so sensitive that my father thinks I should train as a wine taster. Yep, I’m the person who can taste pears and nectarines in a pinot gris. Even though I don’t really like wine. Or nectarines. See my point?

So if you were to give me a ‘surprise’ food, I would likely politely decline unless you ‘ruined’ the surprise by telling me exactly what it was. Which kinda makes it not a surprise. But much better no surprise than bad surprise.

But these, oh boy, these cupcakes are a good surprise. Well, they would have been a good surprise for me, had I not made them and known exactly what was in them. 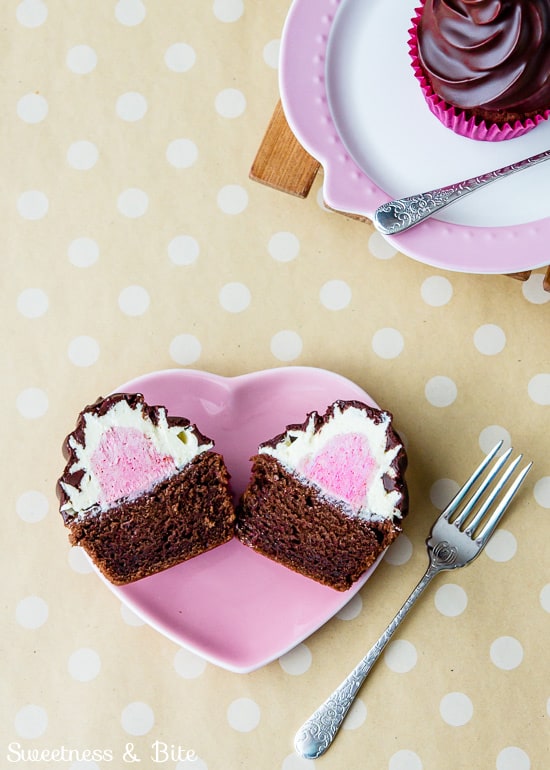 Light chocolate cupcakes, topped with strawberry and vanilla Swiss meringue buttercreams and dipped in a gorgeous shiny dark chocolate shell. Half of the batch had a strawberry buttercream centre with a vanilla swirl, and the other half was the other way around. More surprise!

These look like I tried super hard to hide one flavour of buttercream inside the other, but really all I did was pipe a cone shape of buttercream in the centre of the cupcake with a round tip, and then pipe a swirl around it with a star tip.

(Excuse my jerky gif. Now there is a weird sentence.)

My one concession to my aversion to food surprises was that I didn’t fuss around trying to cover the buttercream completely with chocolate, so you can tell which ones were which, but if you want it to be a complete surprise, you can take a little more time with each cupcake to make sure the buttercream is totally hidden.

Now, this bit here isn’t actually a gratuitous, any-chance-I-get use of a teacup. Funnily enough, a teacup is actually a pretty perfect vessel for the chocolate used to dip the cupcakes. Whatever you use, it needs to be deep enough that your cupcake swirl won’t reach the bottom, and just wide enough to dip the cupcake, plus a little extra room for your fingers. 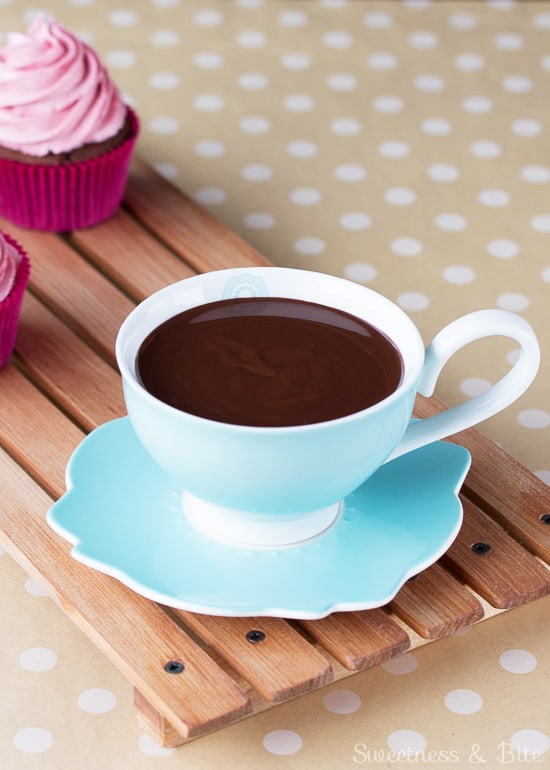 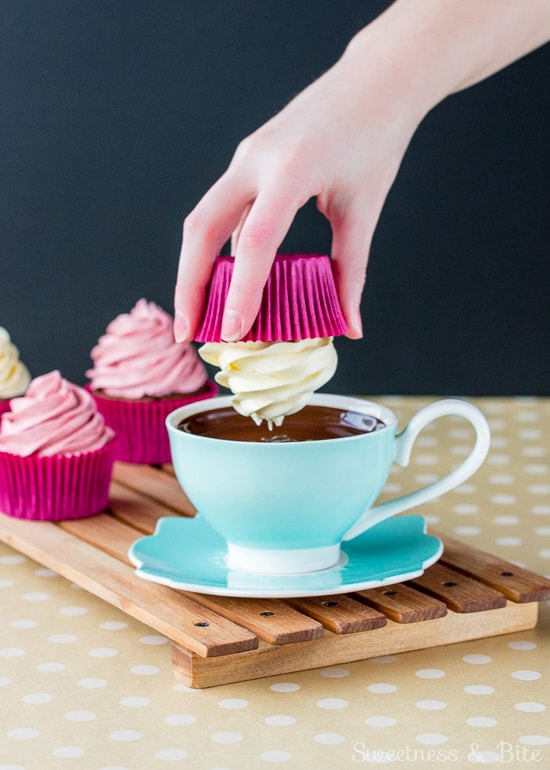 Wiggle the cupcake gently to make sure the chocolate is all up in that swirl. 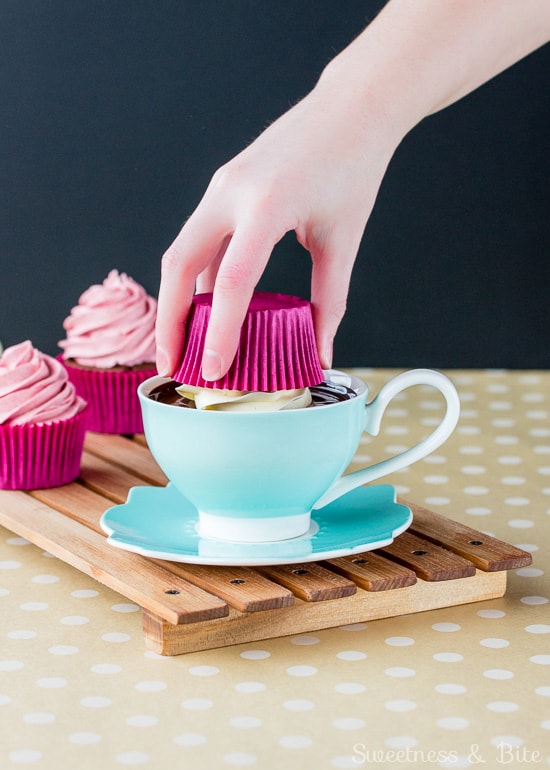 Gently lift it out, and hold it above the cup to let the excess chocolate drip off. 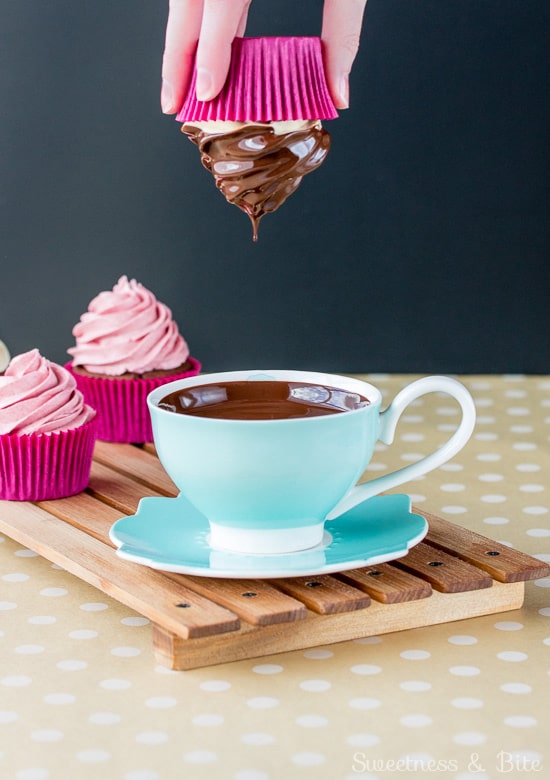 If you can resist the urge to shove the drippy-chocolate cupcake into your mouth immediately, they take about half an hour or so at room temperature to set, or you can speed it up by refrigerating them just until they set (any longer and you risk the moisture from the fridge causing the cupcake papers to start pulling away from the cakes.)

For the Swiss Meringue Buttercream:

For the Chocolate Dip

For the chocolate dip:

For gluten free cupcakes, I used my favourite homemade gluten free flour blend. You could also use a premade gf flour blend if you prefer. If the flour blend you use contains a gum ingredient (usually xanthan or guar gum) then you can omit the xanthan gum from the recipe. These cupcakes work perfectly with gluten or without. If you don't need them to be gluten free, just use all purpose wheat flour and omit the xanthan gum. Freeze dried strawberry powder is available in gourmet food stores, some supermarkets and online. To do the 'surprise inside' icing you will need two piping bags, two large couplers, a large star tip (I used a Wilton 1M) and a large round tip (I used a Wilton 1A). Obviously, if you have two of each of these tips, it’s a bonus, you won’t need to rinse them.
Keywords: baking | neapolitan
Enjoyed this recipe?Tag @sweetness.and.bite on Instagram, and hashtag #sweetnessandbite so we can see it! ❤ 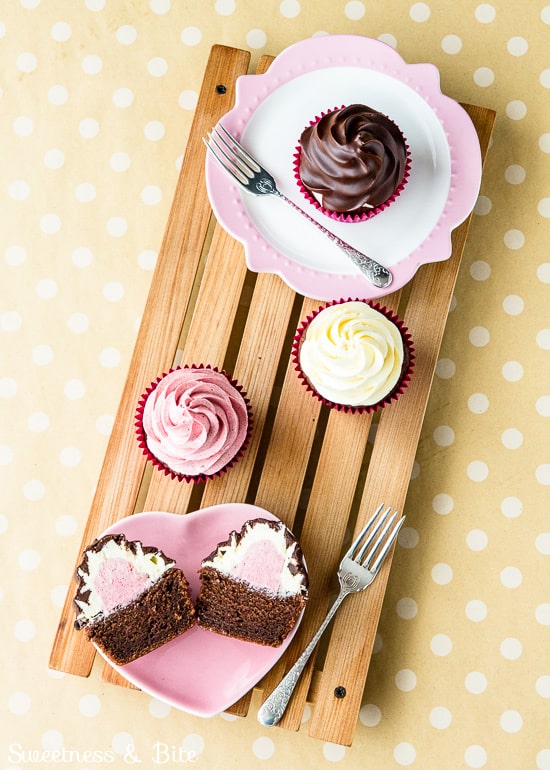